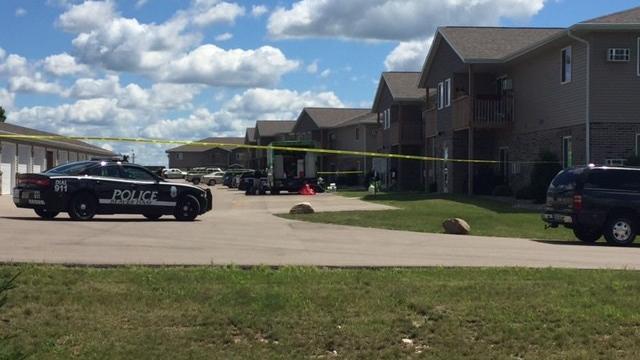 The Wisconsin Division of Criminal Investigation is leading the investigation of an officer involved shooting death in Beaver Dam Friday night.    At a joint news conference in Beaver Dam this morning Beaver Dam Police Chief John Kreuziger,  Dodge County Sheriff Dale Schmidt  and officials from the WI DCI said an unidentified Beaver Dam man is dead following a confrontation with Beaver Dam Police Officers  and Dodge County Sheriff’s Deputies.   The incident began around 6:46 PM when the Police were called to the Spring Lake Apartments on Woodland Drive to conduct a welfare check of a known individual threatening suicide.  The Officers  were aware the individual had access to firearms so the Sheriff’s Office was asked for assistance.  When the Officers and Deputies arrived, the man came out onto a second floor balcony where he confronted the them.  According to the Police Chief and Sheriff, the man was waiving a weapon and reportedly stated that he wanted to commit “suicide by cop.”   Negotiators from the Police and Sheriff’s Office began talking with the man and determined no one else was in the apartment  Meanwhile, the neighboring residents of the building were evacuated.  The discussions with the man continued for about two hours until, when at 8:46 PM,  the man leveled his weapon and fired upon a Dodge County Sheriff’s Deputy.    The Deputy, a 9 year veteran with the Sheriff's office,  returned fire, striking and killing the man.  The Deputy was not struck and no one else was injured.   The Deputy has been put on administrative level as the investigation of the incident continues.   The age, name and ethnicity of the deceased man have not been released.   No other information will be release until Monday at noon when the identification of the man is expected to be made public.