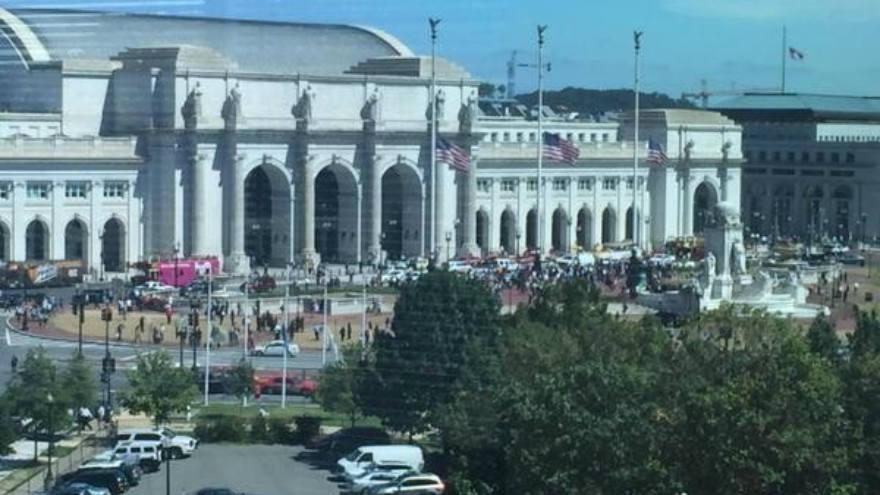 Initially, D.C. Police tweeted that both the female stabbing victim and male shooting victim were being treated for their injuries, but police later put out a statement saying the male suspect died.

Police did not release the identity of the man pending notification of next of kin. The stabbing victim is expected to survive, police said.

According to Gwendolyn Crump, director of communications with the Metropolitan Police Department, a security guard witnessed the woman being stabbed by the suspect and gave chase. Armed with a knife, the suspect turned and accosted the security guard, who fired and struck the suspect.

The stabbing appeared to be domestic in nature, Crump added.

The train station was briefly evacuated following the shooting. U.S. Capitol Police also warned lawmakers and congressional staff to stay away from Union Station, which is a few blocks from the Capitol.

Employees at the Einstein Bros. bagel shop located next to the area cordoned off by police reported hearing a single gunshot before being evacuated.

But police quickly began allowing people back into the major commuting and retail hub and said there was no active shooting situation.

The complex is more than just a busy rail station for the Northeast corridor. It also houses many restaurants and shops, making it a busy lunchtime destination.

It is also just a few blocks from the Capitol and many media bureaus, making it a popular spot for the press and congressional staffers.

Kenneth Pendarvis, 50, who lives in Washington, said he was sitting down at the McDonald's in the Amtrak corridor, eating chicken nuggets and fries, when he heard a gunshot.

Pendarvis said the closet was near the McDonald's and about the size of a linen closet. He said multiple people were able to pack in there, but could not say how many. He emphasized that he did not see the shooting, but heard it through his music.