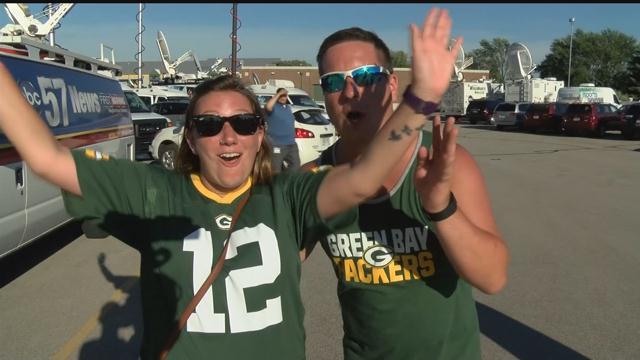 Brett Favre's induction into the Packers Hall of Fame could also be called a homecoming or reunion between him and the fans.

\"I knew there were a lot of tickets sold, and I figured there would be a lot of people in the stands,\" said Favre. But I wasn't expecting this type of ovation.

\"It's unbelievable,\" said Packers fan Brad Butler. \"He's such a great guy. He deserves all of this credit. Just a class act.\"

\"I'm sure it just makes him feel so great,\" said Packers fan Rebecca Wilcox. \"He deserves this. He worked really hard for his fans\"

We also spoke with a Favre fan from the Twin Cities.

\"I appreciate the legacy, one of the best gun slingers in the game,\" said Egan. \"I got a lot of respect for the franchise and for Brett Favre, and I'm here to show my support. I've never seen anything like this.\"

A joyful evening at Lambeau Field.

The fans missed Favre, and Favre truly missed his fans.

He will be in Madison Sunday afternoon for his flag football game which will include some of his former teammates and NFL players.