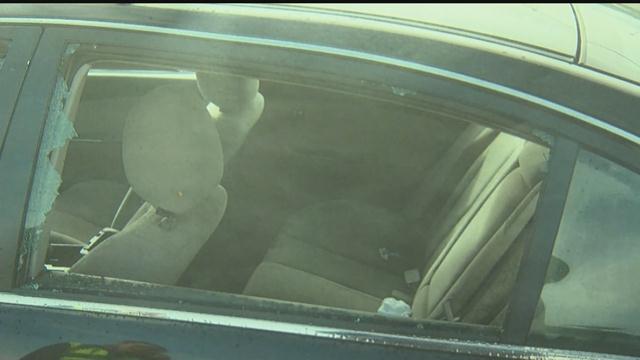 The family of Jay Anderson, Jr. released photos Monday of the car in which their loved one was shot and killed by a police officer.

The pictures show the car's busted out windows, broken glass covering a child's shoes and bullet holes in the head rest. There was a lot of blood too, pictures that are too graphic to show on air.

"It was hard cleaning his blood up, to actually have his blood on my hands as I was wiping it off the material, off the seat, off the armrest, off the seat belt," said Star Delarosa, Anderson's fiance. "It was just, I cried because that was my best friend."

Delarosa had no idea the car would be returned in the condition it was.

But, their attorney Jon Safran says it's not uncommon for that to happen. In fact, not cleaning it allowed his investigators to collect their own forensic analysis.

"We know some of the trajectory of the bullets because there are bullet holes in the seat," he said.

Five months ago, Anderson was shot dead by a Wauwatosa police officer while in his car at Madison Park.

Authorities said he had a gun in the car, but Safran said investigators failed to get pictures of where they claim the weapon was.

"We see from the video, quite clearly he had his arms in the air a number of times and it didn't seem to me he was lunging for, reaching for, touching that handgun, if it was in the front passenger seat," said Safran.

Delarosa has repaired the car and now drives it.

Having a piece of Jay back gives the family some comfort and they hope releasing the pictures sends a message in their fight for justice.

"I want Joseph to be charged with murder," Delarosa said. "He murdered Jay. Jay didn't deserve to get killed."

The officer's name hasn't officially been released. A decision on whether to file charges against him is still under review by the Milwaukee County district attorney.

Meanwhile, the family is still waiting for the rest of Jay's belongings to be returned.