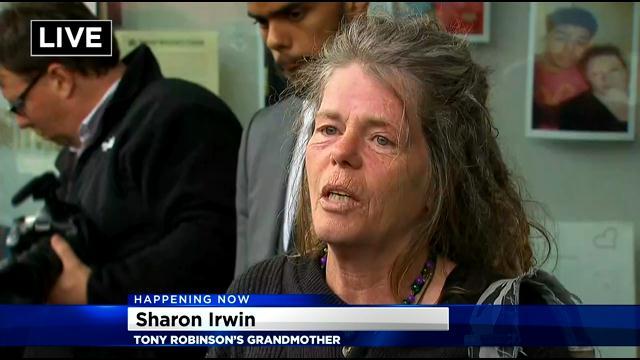 In an emotional press conference the grandmother of Tony Robinson told the media she had to live with his death forever, not like the reporters who get to go home at night.

Her statements came after the Dane County District Attorney announced he would not be prosecuting officer Matt Kenny who shot Robinson 7 times during what the officer said was a struggle in which he feared he would be knocked unconscious and lose his gun.

\"My grandson has been slandered since the beginning, he was set up\" Sharon Irwin declared. \"I wear his sweater because this is all I have left. You don't know the kid I know.\"

Robinson who has a prior conviction for a home invasion, was characterized by 9-1-1 callers back on March 6th  as dangerous, erratic and high on drugs. The callers included his friends who said they feared for their safety and his.

Officer Matt Kenny says when he responded to the call he heard a commotion in the apartment in question. By that time, witnesses said Robinson had been roaming the neighborhood and assaulting people.

Damage to the dry wall inside, according to the District Attorney, supports Kenny's claim that he was immediately assaulted by Robinson and knocked into the wall.

Kenny fired his weapon seven times. A final shot from his gun is seen on video as he stumbled backwards out of the apartment building just seconds after entering.

Family attorney Jon Loevy said that final shot, downward in his view, is most disturbing, but that the family would need more time to digest all the information that was released, before deciding on the next step.

\"There was sufficient evidence to go to trial,\" Robinson's Uncle, Turin Carter, said during a brief statement at the press conference. \"That was taken away from us, at least for now.\"