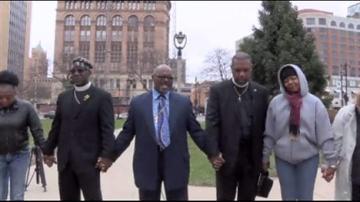 MILWAUKEE-Just days after 31 year old Dontre Hamilton was fatally shot in a struggle with a Milwaukee Police officer, his family returned to the scene of his death.

They brought photos and stuffed animals to Red Arrow Park, right outside the Starbuck's coffee shop where the officer was called on Tuesday to deal with what police called a \"troublesome subject.\"

The circumstances of the shooting are still being investigated, but police said Hamilton became agitated during a pat down with the foot patrol officer, grabbed his baton, and was hitting the officer on the head when the officer opened fire.

A day later, police revealed Hamilton had a history of mental illness.

On Friday during the prayer ceremony, the family told CBS 58 that they are waiting for a complete accounting and answers to why the situation escalated.

Hamilton's brother says he isn't pointing the finger at police, but he wants to know more specifics.

The family acknowledges Hamilton's mental illness and that he was often paranoid that he or his family would be hurt.

They hope his passing will bring better understanding of mental illness and get the community more engaged to prevent further tragedies.

Once again, our community must respond to a tragedy in which a person of color, in this instance

a vulnerable African American man, has lost his life when a City of Milwaukee Police Officer

fired up to 10 shots, striking him numerous times. We know that this is not new, but Dontre

Hamilton’s death is merely the latest in a string of incidents too numerous to mention. This time

it happened in broad daylight, during the middle of the afternoon, in the heart of the City’s

downtown and theater district, across the street from City Hall.

It is a sad and unfortunate day whenever a person’s life is ended. When that loss of life occurs

under circumstances that are questionable and, particularly, at the hands of police, who are

supposed to be protecting us, we must be alarmed. We extend our heartfelt sympathy to the

Wisconsin Department of Criminal Investigation that is occasioned by the new Michael Bell law.

Moreover, we ask the U.S. Justice Department to add this incident to the list of incidents that the

We must confront our deficiencies and develop policies, procedures and actions to effect

change. These should contain measurable features that allow us as a community to hold

We must address issues relating to the needs of emotionally or mentally unstable persons.

We can look at the actions of other cities such as Houston, Albuquerque and others, and

enforcement. We need an acceleration of plans for more mental health treatment and