Family lived in vacant home that was destroyed by fire 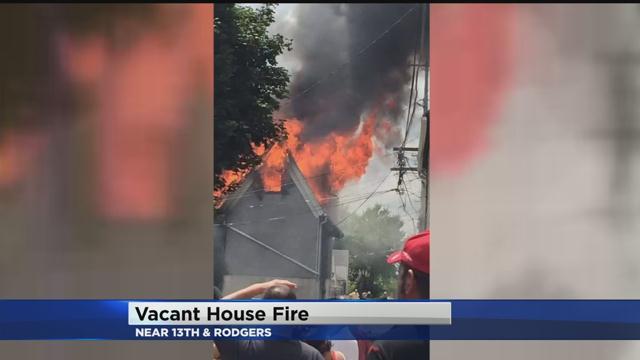 A fire destroyed a home off of 12th and Rogers home on Wednesday morning. It first broke out at around 3 a.m. then again at around 11 a.m.

The home was suppose to be vacant, but we're learning, along with the landlord, that wasn't the case.

\"It's bizarre. It's kind of scary,\"said Scott Wisniewski.

He isn't just talking just about the fire though. He's also referring to what the information he found out afterward.

\"Everybody (neighbors) was telling me like we should have known. They said ,Yeah, the family, they barely got out. I said, there's no family living upstairs.' They all looked at me like I was strange,\" said Wisniewski.

Strange because as far as he knew, the second story of his 90-year-old uncle's home was supposedly vacant.

\"They said there was at least two kids and a mom and a dad, so a family of 4,\" said Wisniewski.

Surprising news, since he was the one who cleared out the home.

\"When you look at the fire, you can see furniture up there which wasn't there because we cleaned the flat out after my grandma passed away,\" said Wisniewski.

That was five years ago.

Neighbors said a Hispanic family moved in a few months ago and they even saw a man collecting rent.

\"we would like to know who this family is because they got displaced, who was collecting the rent and how this fire got started,\" said Wisniewski.

The American Red Cross confirmed they helped family living in the home after the fire on Wednesday.

Meanwhile, firefighters tell us they treated this fire just like any other.

\"A report of a fire at any structure gets the same type of search every time. It's a thorough and complete search that we do in every building. We won't call it empty, we won't call it vacant until we have searched it,\" said Terry Lintonen.

Fire fighters do tell us there was no one home at the time of the fire.