Family Gets $2,000 Cellphone Bill Because Of New Feature On iPhone 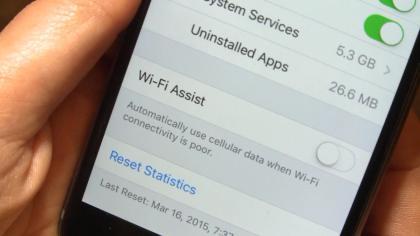 DENVER (CBS4) – A family says they got a $2,000 bill because of a new feature on iPhones that’s part of Apple’s latest operating system upgrades.

The new feature is called Wi-Fi Assist. It can be found on Apple’s 9.1 operation system, and although its intentions are good, it has the potential to result in a shocking phone bill.

When teenager Ashton Fiengold got a warning that his data usage was up he didn’t think twice.

“It just said maybe 65 percent of your data has been used,” Fiengold said.

But then his bill came.

“I thought my dad was going to kill me,” he said.

Wi-Fi Assist is meant to ensure there’s always a strong signal by automatically switching from Wi-Fi to cellular data when the signal is weak. It turns out Fiengold’s bedroom has weak Wi-Fi. So while he thought he was using Wi-Fi he was actually using data — a total of 144,000 megabytes in all.

Apple insider Mike Campbell says while the feature is helpful to some, many are unaware it exists.

“It comes by default, it’s switched on, that’s part of the reason why there’s kind of an uproar,” Campbell said.

To turn it off, go to “Settings,” then “Cellular,” and then down at the bottom is where Wi-Fi Assist can be disabled.

Apple released a statement saying that while the feature may cause users to eat up more cellular data, for more users it should only be a very small percentage.