Family expresses concerns after man convicted despite issues with jury 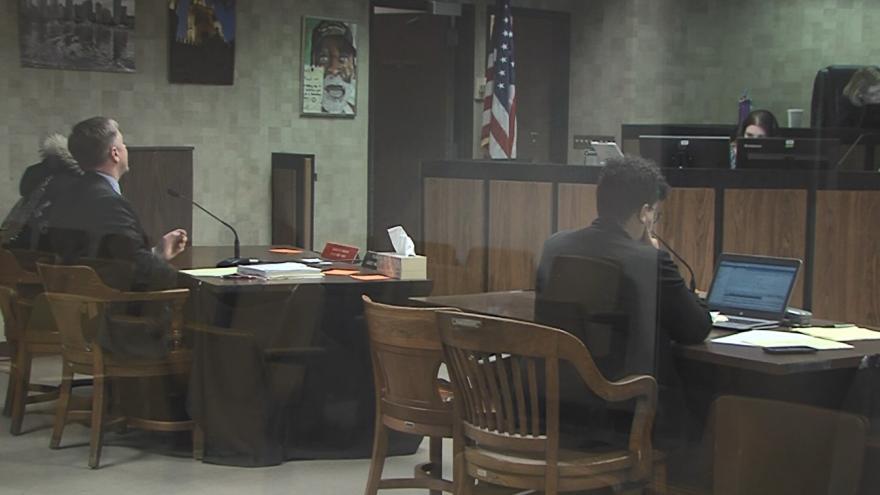 His family says it should have never gotten to that point.

"I would have preferred to have it called a mistrial," said his sister, Venisha Simpson.

According to the criminal complaint, a man began to argue with Flournoy outside of his home, which resulted in the two getting into a physical altercation in the street. In an attempt to break up the fight, the mom of the man who started the fight allegedly shot two rounds into the ground. The fighting stopped. As the man, his girlfriend, mother and kids drove away, Flournoy went into his home, got a gun, and shot at the car. Flournoy said he was doing it in self-defense.

A jury found him guilty on the second degree recklessly endangering safety charge, but court transcripts show there were some issues with the jury.

"He was supposed to be entitled to a fair trial and he was just not, so just very disturbed at the whole process," said Simpson.

According to a copy of the transcript for day two of his trial, Judge Michelle Havas said, "While we -- I was doing a sentencing, there was a bit of drama between the jurors."

The transcript states a juror was feeling uncomfortable deliberating with the rest of the jurors. Specifically, a juror got into "a bit of a" shouting match with another juror.

"She indicated she did not feel comfortable continuing to deliberate with the rest of the jury. She said things along the lines of: I'm willing to vote however they want me to so I can just get out of here, and I believe other people are voting that same way," Havas said.

That juror eventually entered the courtroom and appeared to be upset and tearful, according to the transcript.

When discussing some confusion in the charges to the judge, the juror said, "When we got to the one that I think he wanted -- and I just wanted to hear -- now that everybody understood that you have to pick one, I wanted it just to be read out, and then let everybody say again what do they want, which was -- I kind of know that it was going to be, but he didn't want me to give that. He just flipped out, like accusing me of things and threatened me -- first he threatened to storm into your office to tell you how he felt, and I think when he got to the door it was more -- more 'come to me.' But I'm sorry. I said, 'To me, you can't go off opinion or anything. You have to look at what was presented to you and read the instructions, and you can't go further. You can a little bit with common sense, but I don't know. So that's it. So I guess I'm a holdout."

After some more discussion, Judge Havas brought out the entire jury.

"It's come to my attention that deliberations have not gone smoothly," he said. "You came up with verdicts. They were improper based on the way this has come out, and after you went back to continue your deliberations and come up with a proper verdict of one verdict form as to each count, things escalated. It is incredibly important that everyone be respectful to one another, listen to one another's point of view, and get this done. There is no other jury that's going to be in a better position to decide this other than you. So, what I'm going to do is send you back with instructions to be respectful of one another, to hear each other's point of views, and attempt to come up with a unanimous verdict."

Flournoy's attorney, Nathan Opland-Dobs, eventually said, "I informed the court I was going to be moving to ask the court to find a mistrial has happened, that this jury should not continue to deliberate and this case should not be mistried. It appears from the comments that our deputy reported to the court, that you reported on the record, and the things Juror 13 said, that it is likely that decisions are being made based on improper reasons, improper purposes, that it's -- an allegation was made that perhaps people are making decisions based on fear."

Opland-Dobs added that the juror mentioned she was threatened.

"I don't know what exactly that meant that she was threatened, but perhaps out of fear decisions are being made, out of -- it was mentioned that decisions might be being made for the purpose of 'let's all get out of here on time' which is entirely inappropriate for a criminal-case jury to be deliberating on."

He also says, "I've never had this before in a jury where jurors had to be separated, even for a short time."

Opland-Dobs noted that the juror said she was willing to go back to deliberate some more, but that she expressed reluctance at it.

"For these reasons, I believe that there's been a mistrial and that this case should be adjourned to be retired."

Judge Havas responded: "Okay. And I absolutely understand that, and I know you needed to make that. I am hopeful that we are going to be able to get this resolved with the admonitions that have come. I have never experienced this myself either, but at this point -- when you get from a jury "we're hung," there is a mechanism for sending them back with an Allen instruction, a bit of a pep talk of "you guys can figure this out as best" -- that's what I attempted to do, to kind of tailor my comments to be reflective of those same principles. I don't know. At this point I'm going to deny it based on what we have in front of us."

The jury was sent home to continue deliberations the next morning.

Opland-Dobs and the judge continued their discussions, with Opland-Dobs saying he would renew his motion for a mistrial the next day.

Havas stated, "The deputy indicated to us -- and he was very circumspect in what he said -- he said the jurors reached a verdict on one count, but not the other. He did not say which was which. He also said that the foreperson was concerned that juror 13 was voting just to get it over with."

Judge Havas eventually asked Opland-Dobs if he would like to renew his motion for a mistrial.

"With that information, we have more evidence of exactly what I was concerned about when I made the last motion, that the jury is deciding matters based on the wrong things, the wrong concerns, the wrong considerations," Opland-Dobs said.

He also added that when the jurors were asked what time they would like to start the next day, the juror who had expressed concerns earlier, looked around, saw that so many other people raised their hand and she raised her hand, too just to get along with everybody.

"When you told them to come back, two of the jurors looked at the juror foreperson with that I interpreted to be a scowl. They were disappointed. I'm reading into it, of course, but I think they were disappointed because he, because he was trying to be so careful, was making them come back tomorrow. She's going to come back tomorrow and go along with what everybody else says after having them come back the next day. That's my concern."

The next day the jury reached a verdict.

"I don't feel like he got fair treatment, and he deserved that," said Flournoy's mom, Lorraine Flournoy.

Flournoy's family says they plan to appeal his conviction.

A representative from the judge's office said she would decline to do an interview about the case because there may be an appeal, so it's not appropriate for her to be speaking about the case at this time.