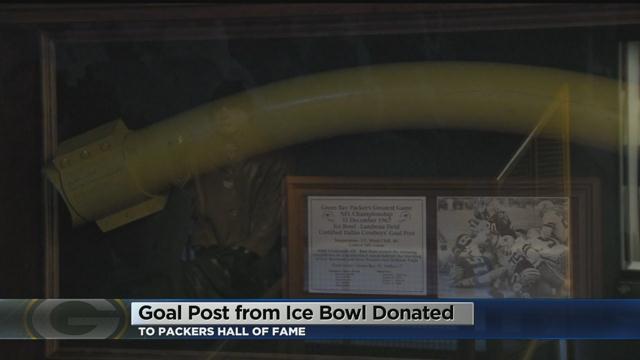 The Green Bay Packers Hall of Fame this week received a unique donation of a section of the goal post from the ‘Ice Bowl,’ the 1967 NFL Championship game between the Packers and the Dallas Cowboys.

The five foot-long section of goal post was donated by Stew Mills and the Mills family, who had received it from the James and Barbara Smith family. Both families attended the Ice Bowl, and following the victory that was sealed with Bart Starr’s quarterback sneak, the Smiths found themselves on the playing field taking down the goal post with a group of several strangers, all of whom wished to lay claim to the post’s lower section.

The group loaded their section into the Smith family van and drove to a construction company’s shop operated by one of the members of the group. They cut the goal post section into pieces, dividing the pieces amongst the group.

The Smith family’s section remained in their home in the Town of Center until 1990, when James Smith gave it as a gift to the Stew and Henry Mills families. The goal post was displayed at the Mills Fleet Farm Appleton office in the years since then, and the Mills family is proud to donate the unique artifact to the Packers Hall of Fame for fans to enjoy.

“Since the Ice Bowl was such a once-in-a-lifetime event, I am happy to facilitate the goal post’s return home to the many fans of the Green Bay Packers,” said Mills.

The goal post is now on display in the Ice Bowl Theater on the second floor of the Green Bay Packers Hall of Fame.