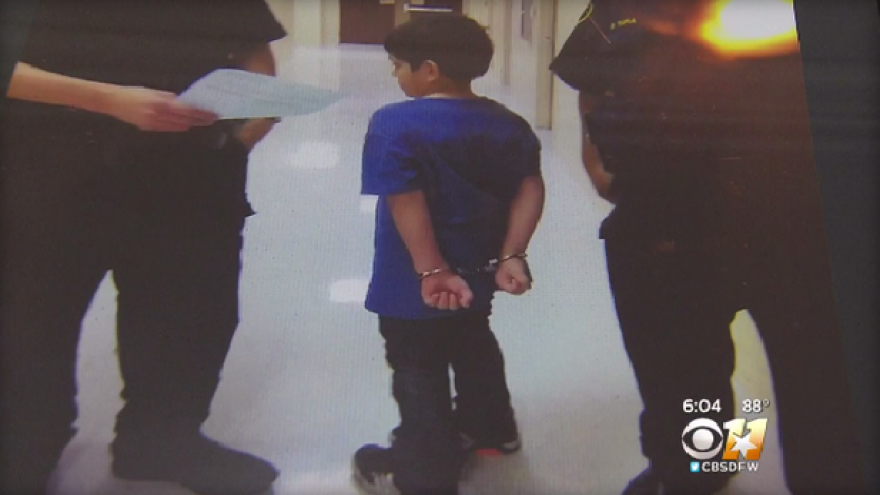 DeSoto, Texas --  (CBS NEWS) A family is outraged at police for placing their 7-year-old son in handcuffs at a mental health facility in Texas, CBS Dallas-Fort Worth reports.

April Obin says her son has attention-deficit/hyperactivity disorder (ADHD), and tends to disrupt class at Gabe P. Allen Elementary School several times a week. But he has trained counselors that help him cope with the mood disorder.

On May 9, Obin says her son had an episode that turned violent and he began to bang his head against the wall.

Obin's attorney, Amar Dhillon, says the school was having standardized testing that day. The boy's counselor wasn't available, so they called his mother in for assistance.

"Before she could get to the school, the DISD police department was called," Dhillon said. "[They] handcuffed the child and took him away."

Upon his arrival, the mental health facility gave the boy emergency medication to help calm him down, CBS Dallas-Fort Worth reported. The facility then fought a judge to keep him there for up to 30 days. The boy remained in the facility's custody until Monday.

His family says the school and police made the situation much worse than it needed to be.

Dhillon has made serious accusations against district police, saying officers used excessive force on the child by causing bruising on the boy's legs as a result of beating him with a baton. The family's lawyer also claims police used a Taser during the encounter.

"The boy did vividly describe being shocked and his body convulsing," Dhillon said. "He was very clear about that."