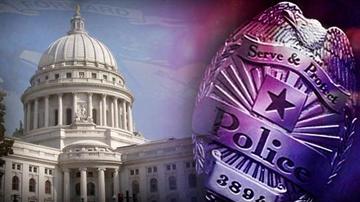 Madison--  The families of three Wisconsin men who died in police custody took their campaign for a new law to the State Capitol and a national newspaper Friday.

\"We think that this is going to be ground zero for launching this nationally\" Michael Bell told a  staffer for a state legislator during a visit to the State Capitol Friday.

Bell's son was unarmed when he was shot to death nine years ago Saturday during a scuffle with Kenosha Police.  Bell placed a three-quarters page ad in Friday's USA Today newspaper highlighting his son's death, and the police custody deaths of two other Wisconsin men.  Bell believes the only way to get an impartial finding of whether an officer violated department policies is to require an independent review of the deaths.  He was joined at the capitol by the families of Derek Williams, Jr. who died in the backseat of a Milwaukee police squad car, and Paul Heenan, who was shot and killed by Madison police a year ago Saturday.  Officers in all three encounters were cleared of any wrongdoing.

\"Each one of these cases there has been a very troubling investigation. And grouped together, you can tell that there's a problem here in the State of Wisconsin,\" said Bell.

Under Assembly Bill 409, Wisconsin would become the first state to have an independent board of review investigate police-related deaths.

Wisconsin Attorney General J.B. Van Hollen has said the law would be an unnecessary expansion of government, and argues district attorneys already provide an impartial review.

A public hearing on the bill will be held in December.