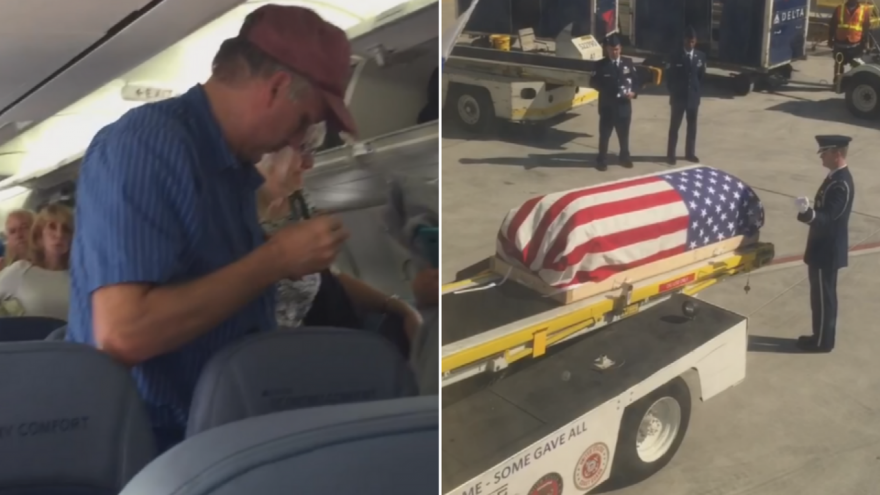 You might have seen this on a flight you were on.

Now, there is an etiquette you need to follow. This is supposed to be an emotional trip. Sometimes the fallen soldier's family is on board the plane and simply bringing him or her home to their final resting place.

Back on July 6, SSgt. Andre Taylor, an airman who was stationed at Luke Air Force Base, died and his body was being transported back to his home in Michigan.

During the flight, the passengers are told several times that when the plane reaches the gate to remain seated until the casket is taken off the plane.

Ken Fitzgerald, a retired airman, was on that plane.

"We have a fallen soldier onboard, fallen airman and we ask you to remain seated as we pull into the gate until he can be escorted off the aircraft first," Fitzgerald said.

Having been in the Air Force, Fitzgerald knew what that meant, show respect for the fallen who have served this country.

However, when the plane reached the gate, the fallen airman's escort headed for the door and most passengers got on their feet and headed out.

"I was just in shock. I was looking at them and I was like, are you kidding me?!" Fitzgerald said.

Fitzgerald took video of the passengers but says it wasn't to shame them but for others to view it and learn how to show respect during the transport of a fallen service member.

I did speak with the family of SSgt. Andre Taylor.

"I was saddened by the disrespect people had displayed on the plane that day but now I'm just so overwhelmed by the love and support my brother and family has received [sic] because of that disrespect. It has really helped my family get through this hard time," his sister Tiffany Dobson said.