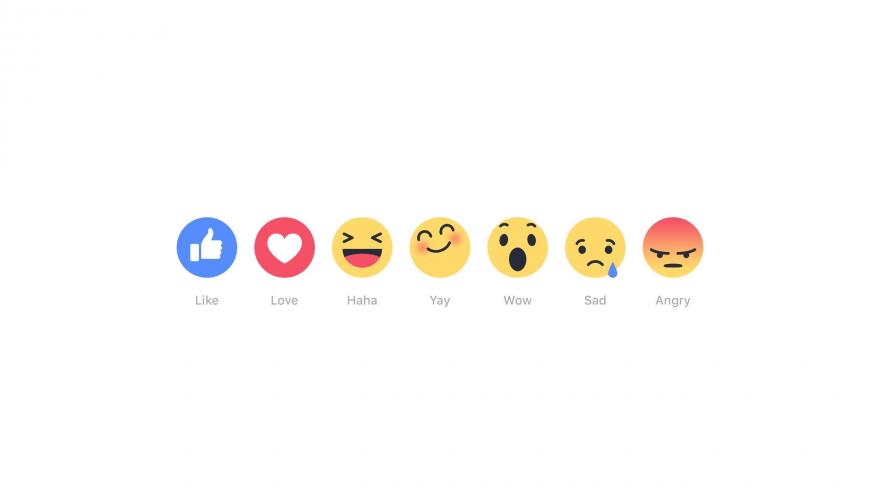 Anyone who uses Facebook can now choose from these "Reactions" on top of liking, commenting or sharing something.

If you're on your phone, the new buttons appear after you hold down the Like button.

If you're on a computer, you'll see them when you hover your mouse over the Like button.

Facebook researchers, engineers and product teams have spent more than a year preparing Reactions for launch. They worked with sociologists, consulted focus groups and conducted surveys to determine which emotions would make the final cut. They looked at the most popular stickers and emojis on the platform for clues too.

According to product manager Sammi Krug, narrowing down the set of possible responses and making sure the emoji faces would be "universally understood and equally useful" were the two of the biggest challenges.

"We wanted to be really, really careful about which reactions we [launched]," she told CNNMoney in an interview last week. "Are we giving people more tools to express themselves more accurately and authentically?"

Before Wednesday's global release, Reactions was already live for Facebook users in Spain, Ireland, Chile, the Philippines, and a few other countries. Initial reactions to Reactions has been positive, according to Krug, and "Love" has been the most popular.

"Yay" -- an eyes-closed smiley face -- was scrapped after tests found that not everyone grasped its meaning.

"That was one of the bigger surprises," said Krug.

Missing from this set of responses is a "dislike" button -- an option CEO Mark Zuckerberg first hinted at in September.

But launching a dislike button would have risked turning Facebook into a place where people vote posts up or down.

"That doesn't seem like the kind of community that we want to create," Zuckerberg said during a town hall Q&A.

Reactions marks one of the biggest changes to the Facebook platform since its inception 12 years ago --right up there with News Feed and Timeline.

At worst, some users could find the new choices confusing or unhelpful. But even if a few million people "Love" or laugh a few times a day, that's still a lot of new, profit-driving data for Facebook and its advertisers.