Facebook Ditches Humans in Favor of Algorithms for Trending News 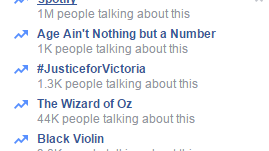 (CNN) Facebook is removing the troublesome humans responsible for manually writing news descriptions and headlines for its Trending box. The company is turning the job over to algorithms that automatically select topics and generate text.

The announcement comes months after Facebook (FB, Tech30) was accused of political bias in in its "trending topics." A Gizmodo article claimed the freelance editors responsible for picking the news and writing headlines were favoring liberal topics over conservative ones.

Following an inquiry from the Senate Commerce Committee, Facebook conducted an internal investigation in May. The company said it found no evidence of any bias, but still said all employees would have to undergo political bias training. Mark Zuckerberg even invited top conservatives to Facebook to learn more about the process.

The trending box shows a list of popular news topics and is intended to "help people discover interesting and relevant conversations happening on Facebook, about breaking news and events from around the world." The lists are automatically personalized based on an individual's location and interests.

As of this writing, the top trending topics on my page were Go Topless Day, Al Roker, and musician Yung Joc, who recently got a haircut.

As part of the overhaul, the box will now only show key phrases instead of headlines and summaries. Below each name or topic, there will be a number of how many people are discussing it on the social network.

The team of contract journalists that was previously hired to manage the trending feature has been disbanded. However, some people will still be manually involved with the process to "ensure that the topics that appear in trending remain high-quality," according to Facebook's post.

For example, "lunch" trends everyday around lunch time, but will not appear in the box unless there is some news-related reason, like Al Roker and Yung Joc eating lunch topless.

Facebook says switching from people to algorithms will make it easier to scale up the feature and deploy it around the world.

"This is something we always hoped to do but we are making these changes sooner given the feedback we got from the Facebook community earlier this year," said the company.