Eye, Mouth of Candidate Cut out of Campaign Sign in Lake Geneva Vandalism 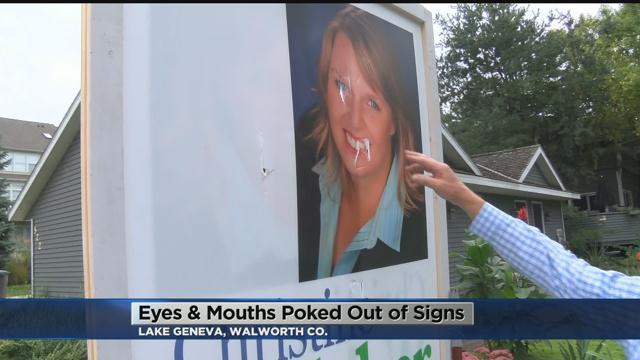 The signs were put up by the Walworth County Democrats along Baker Street in the city. The vandalism happened sometime before Sunday afternoon, authorities said.

Investigators currently do not have any leads in the case.

On Tuesday the fingers of Bob Cole poke through a Russ Feingold sign. He usually just installs them for the Walworth County Democrats - but armed with masking tape and another round of zip-ties - now he's doing rehab.

The most work needs to be done on a campaign sign for Christine Welcher who's running for the assembly seat for the 32nd District.

Someone forced multiple holes into her poster directly on the eye and mouth.

"They only way they could be is someone kicked 'em, beat 'em, chop 'em, cut 'em or something," Cole said.

"To me this looks like hate. Somebody, you know, they go for their face to hurt 'em," Cole said.

Lake Geneva police said there is no surveillance video of what happened.

Cole said he does not have much hope that anyone will be held accountable. But he does know the impact. He says these signs cost about $100 a piece.

The candidate also called the damage 'unsettling'. Reached over the phone - Christine Welcher said if someone wanted to destroy the sign they could have done it. Instead the person who damaged the sign decided just to target her face.

While repairing the sign, Cole said he wants people to remember the First Amendment.

"I imagine a lot of people have those thoughts when they see another sign for another party but they don't go rip it down. They respect their opinion also. So I just think whoever did this just doesn't have any respect for anybody," Cole said.