MILWAUKEE (CBS 58) -- Flooding is becoming an all too common occurrence across southeast Wisconsin. Whether it be on the east side of Milwaukee, Grafton, or Burlington, there have been several high impact rain events over the past several years.

Clark Evans, an associate professor and program chair with the Atmospheric Science program at UW-Milwaukee, has lived in Grafton for the last 7 years, and saw the impact of the August 2018 Grafton flood firsthand.

“The neighbors down the hill from me had basement flooding up several feet into each of their basements. The roads were blocked off for a couple of days before the water could be able to recede," says Evans.

Evans says the day to day type of rainfall events aren’t really changing all that much, but what are changing are the extremes: the very dry events, and in particular the heavy rainfall events.

“So we hear about what are known as 100 year floods or 50 year floods that you’d expect to occur every 50 to 100 years or so. Those are changing," says Evans.

“They’re becoming more frequent, and what are now 50 and 100 year flood events have much more rainfall associated with them, a half an inch to an inch or more in terms of a 24 hour period than what they used to be," says Evans.

The heaviest rainfall events are getting wetter across all of southeast Wisconsin. In particular, the area from Port Washington to Sheboygan to Fond Du Lac has seen their heaviest rain events get wetter by over an inch since 1960. 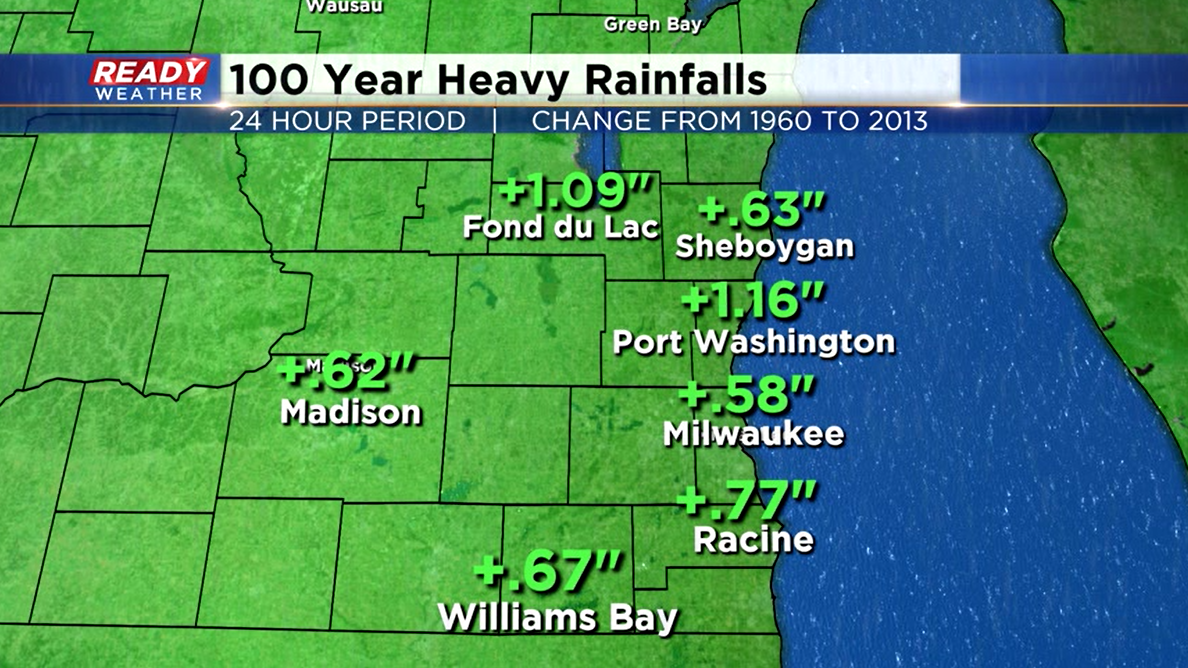 Saturated soils and heavy rain events have made it very difficult for farmers over the last several years, especially those at Country Visions Cooperative in Sheboygan county.

“Last spring we had a continuous rainfall it seemed like. Every couple of days we’d get some sort of precipitation. It kept most farmers in this area out of the fields until about the first week of June," says Chris Reichert, a sales agronomist at Country Visions Co-op.

Reichert says about 50 percent of their crops didn’t even make it into the ground last year. To make matters worse, 5 inches of rain fell over the first 2 days of October after a soggy September, which delayed their harvest.

“We got into the fields too late, which did not allow us to harvest a lot of the crops at the proper time. And not only does that effect the fall’s harvest, but often times that leads into the following spring with increased compaction," says Reichert.

Below normal snowfall this spring, along with dry conditions in April, created ideal soil conditions for planting on time in early May.

Then came the frost, followed by 7 inches of rain a week later, which caused soil erosion and standing water throughout their fields. Some of their fields run along the Sheboygan River, which made the flooding worse.

“With that 7 inches of rain in that past week there, we saw a rapid rise in the water, which lead to a lot of flooding in our fields. Being that a lot of those corn plants had not emerged yet, and being under water for 3 to 5 days, lead to both uneven emergence and some seedling loss," says Reichert.

On May 18th, the Sheboygan River crested at it’s 6th highest level of 11.07 ft., a little over a year after it’s highest crest on record occurred in March of 2019 at 13.48 ft. Reichert says his family members at Reichert Land and Cattle lost about 10% of their corn crop due the heavy rain and flooding.

The type of soil in their fields isn’t helping them dry out either.

“This part of the state, our soils are very clay based, which makes it a lot harder for water to dissipate, resulting in more ponding, more runoff," says Reichert.

Clark Evans says as long as we remain in this overall wet pattern, the high river crests will continue to be more likely than in the past.

The increase in rain in our heaviest rain events also has had an impact on infrastructure.

“A lot of the infrastructure here in southeast Wisconsin, whether that be Grafton or Milwaukee or even smaller towns, is older. It’s 30, 40, 50, 60 years or more older. So a lot of the infrastructure was designed based off of standards that were in effect at that point and time, such as 50 or 100 year flood events for moving water around. But if those 50 to 100 year floods now have more rainfall associated with them, that infrastructure may not be as readily able to keep up with that amount of rainfall," says Evans.

This is why lowland flooding, street flooding, and basement backups are becoming more frequent. However, communities are making improvements to prevent this from happening.

“We’re seeing communities, here in Grafton in particular, after the May flood, they created a new auxiliary drain for one of the drains outside of the park here to direct water more readily into the Milwaukee River rather than have it back up onto the streets or into people’s basements," says Evans.

Even with the hardships of the last few years and the spring flood this year, Reichert remains optimistic.

“The crop overall has emerged fairly well. We have good stands, we have nice looking crops, so I think guys still have a lot of optimism and outlook for the rest of the year that we’re going to have a good growing season," says Reichert.