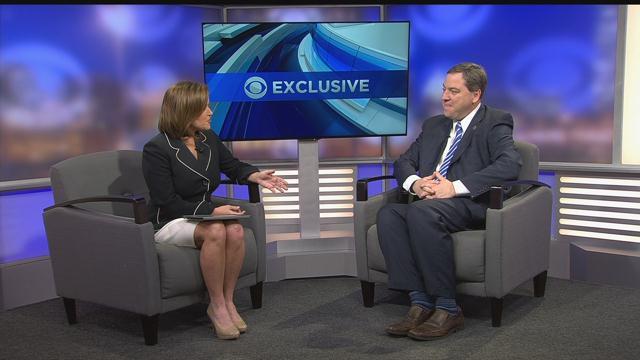 Waukesha County Executive Paul Farrow says he'll remain impartial and not publicly endorse anyone for president at this time.

Wednesday on the CBS 58 News at 4 p.m., he did tell CBS 58's Michele McCormack that Waukesha County being a republican stronghold, means he expects frequent visits from all the candidates and he didn't want to show favor for one over the other.

Still, he had plenty to offer in terms of what he thought about what he's seen so far.

"It is still in the comedy phase. It's unfortunate that we're not getting back to the issues. We're still dealing with some of the side shows that are occurring right now."

"What I really enjoy is that the candidates are here and passionate," Fallow said. "It shows Wisconsin is still in play. It's still an important area."

Farrow also talked about the city of Waukesha's request to tap into water from Lake Michigan.

There were a series of meetings held locally with the members of the Great Lakes Compact.

It is a  legally binding interstate compact among Illinois, Indiana, Michigan, Minnesota, New York, Ohio, Pennsylvania and Wisconsin as to how the states manage the use of the Great Lakes Basin's water supply.

Farrow says the City of Waukesha has set up a good argument on why they have the water.  He said the impression he got after the meetings was that Waukesha was perceived as doing its "due diligence" in presenting Lake Michigan as their only real way to get clean water.

He refuted any notion water supply is a challenge it created by a lack of planning with development.

"II don't know it its our problem," Farrow explained. "When you look at it. A lot of this came back after the EPA realigned their mandate on how much particulate can be in the water. And the radium, which is the biggest kicker, is not something that can be man made or controlled. It's a break down in the soil. So, when they made those changes ,we don't have technology in place that can clean up the aquifers we're looking at. Because the way the water tables are, this is the best option."

Farrow has also requested an overview of fire and emergency service the 37 municipalities. He says there are a number of fire houses in the northwest area of Waukesha County that are similar. He wants to develop a sustainable model of operation that is financially stable yet delivers the level of service that Waukesha County residents desire.

He said the boundaries should be drawn geographically as opposed to based on municipalities.

"We are talking about the heartbeat of our municipalities," Farrow acknowledged. "We don't want to take that away. We want to create a sustainable model where they can work together and share fire trucks. An outside force that 's going to look and say where can you share best practices."