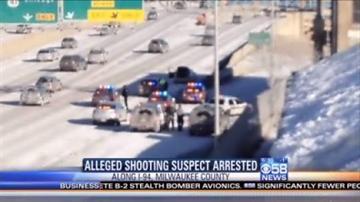 MILWAUKEE -- Authorities making a routine traffic stop in Milwaukee called for backup after realizing the man behind the wheel was wanted in connection to a shooting incident in Waukesha.

Police had been looking for Corral since Wednesday night, after he allegedly opened fire on a car full of people in Waukesha.

He was pulled over for a traffic violation and troopers called in backup when they realized who he was.

The eastbound lanes were temporarily closed as he was taken into custody.