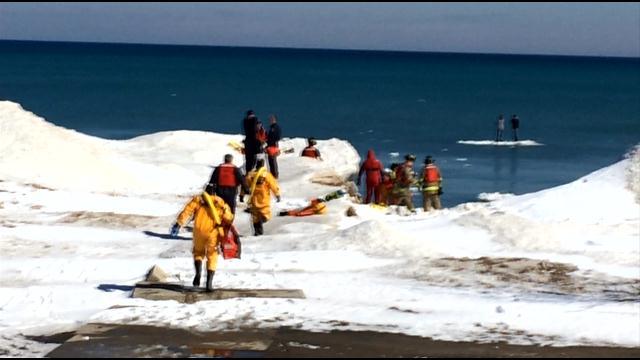 New video shows firefighters rescuing two men trapped on Lake Michigan as the piece of ice they were standing on gets farther and farther from shore.

The Racine Fire Department says these two young men were on a chunk of ice, thirty yards away from shore that was quickly moving farther into Lake Michigan.

But with some quick thinking and some man power the two were safe in no time.

\"We tried using our arms and paddling out but we just got farther and farther,\" said the young man heard on this 911 call.

It's video you'll only see on CBS 58 and in it, you can see it would be a far distance to swim, too far, for someone who doesn't even know how.

\"They need a boat or something to get us. We're too far from shore,\" the man said.

The Racine Fire Department says launching a boat to rescue the boys would have taken too long.

\"We saw they were only 30-40 feet off shore. We knew the capability of our divers, we understood that they were going to be able to get them out there and bring the guys in,\" said Jose Carbajal, one of the men who swam out to rescue the men.

The two men were losing hope.

\"They ain't gonna be able to get us brother,\" one said.

Firefighters came up with a plan. Carbajal and another man put on special diving suits and swam out to the two men

\"We anchored ourselves to the ice, gave them the life jackets, made sure they were dry  and explained we would be rescuing them, then started to pull the ice in with them on it,\" said Carbajal.

A team on shore also helped pull them all  in.

Firefighters tell us Lake Michigan is melting very fast, making it very dangerous and these two young men were lucky to have made it out alive.

\"I think the key thing here is they never even got wet. We got them back to shore with out getting any water on them,\" said Carbajal.

One thing is for sure they were more than appreciative for the help given.