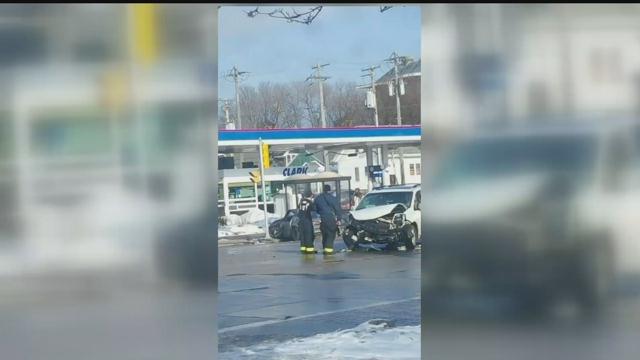 Blindsided at the bus stop: a local teen waiting for a ride home is hit by a car.

What's even worse, police say the driver didn't stop and just drove off. The teen will miss school tomorrow because of his injuries.

It happened at the bus stop on 27th and Capitol around noon Thursday and the 17-year-old exclusively talks to CBS 58 saying he didn't see it coming.

Darien Wallace says he was sitting at this bus stop when he heard a crash. He turned around and saw a car coming at him and that's the last thing he remembers before waking up in a snow bank.

"The impact..how hard it hit it sent me flying into the snow bank," said Wallace.

The 17 year old was feeling lucky because he got out of school early Thursday, around 12, but his luck quickly changed when a car hit the bus stop where he was waiting.

"He was coming and ran a red light and he got hit by another car and once I got a chance to look back he was already coming right back at me," said Wallace.

The impact from the dark colored vehicle picture here was so strong Wallace flew forward into a snow bank.

"I was in shock and in pain. People were around me but I wasn't hearing them because I was focused on what was happening and in so much pain," said Wallace.

He and the driver of the white SUV  involved were taken to a local hospital and treated for minor injuries.

But the driver that hit the bus stop got out and ran.

"From what officers told me it wasn't his car it was a stolen car," said Wallace.

Wallace is now on crutches saying he'll miss school Friday because it's so hard to walk.

Meanwhile, MPD says the man who ran away from the scene has not been caught.