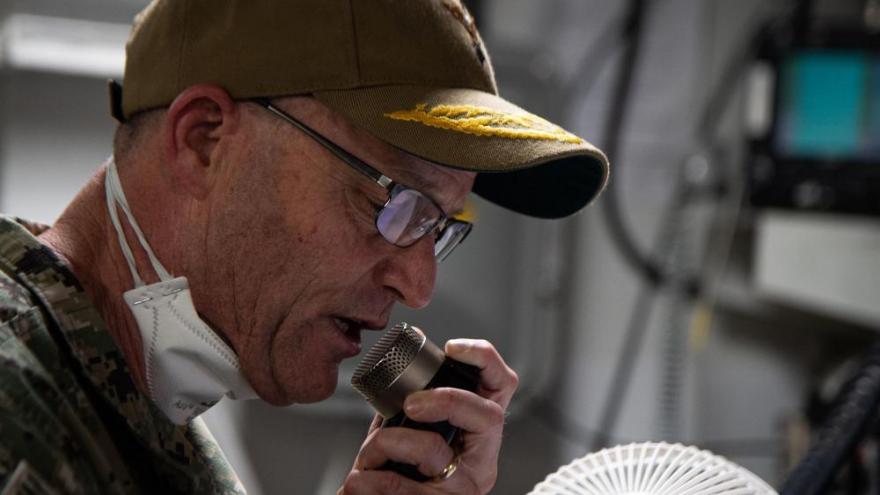 (CNN) -- The top Navy admiral overseeing the virus-stricken aircraft carrier USS Theodore Roosevelt tells CNN in an exclusive interview that he found some sailors "struggling" and "upset" after their commanding officer was relieved of duty by the ousted acting navy secretary who was forced to resign over the matter.

The commander of the 7th Fleet, Vice Admiral Bill Merz, also told CNN that a better job could have been done communicating with crew members about the virus and how the Navy was handling it.

Merz, who is now in a precautionary 14-day isolation period after spending more than six hours on the Roosevelt earlier this week, offered the first direct view into the concerns of many crew members in a nearly 30-minute interview after visiting the ship in Guam.

He described a crew that felt significant anxiety over what they viewed as a lack of information that had been given to them about the virus.

"There was lots of anxiety about the virus," Merz said. "As you can imagine the morale covers the spectrum, considering what they have been through," he said.

Merz was visiting after acting Navy Secretary Thomas Modly resigned, following his decision to fire the Roosevelt's commander, Captain Brett Crozier, after a widely distributed message Crozier wrote about his concerns about the impact of the virus on the crew become public.

Merz repeatedly described the crew as capable and performing well, but clearly in an unprecedented state after the virus hit and their commanding officer, or CO, was abruptly relieved of duty.

The carrier crew was "struggling in the wake of losing their CO and their perception of the lack of activity regarding fighting the virus," Merz said.

Merz suggested that the crew did not appear to have been given a comprehensive and clear sense of the various steps the Navy was taking to help the Roosevelt deal with the virus outbreak onboard. That lack of information may have caused some stress, he suggested, feeding the very visible anger many crew members displayed when Modly visited the ship and addressed them about Crozier's dismissal.

"The specific questions clearly indicated we needed to give them more information about the true dangers of the virus" and how the Navy was handling aboard the ship, he said.

"I certainly don't think it was malice by the ship or the leadership" he said. "I think it was just a matter of getting their arm around what they could and could not tell them."

Merz said that once he began to answer the crew's questions in detail, he saw anxiety ease and questions turn more toward issues such as getting back out to sea.

Many sailors told Merz they were still worried about the fate of their former commanding officer.

Hundreds of crew members had given Crozier a rousing sendoff in videos that went viral, clapping and shouting to show their respect and affection for him. Merz says sailors told him they worry Crozier might be punished under the Uniform Code of Military Justice, something that Modly had suggested before he resigned over the crisis.

"I got very specific questions about whether there would be UCMJ against their captain," Merz said, adding that he told them it is unlikely because Crozier was relieved over his judgment in widely distributing his views, rather than being relieved for a potential crime.

Merz was aware his visit to the ship provided a relief valve for the crew to talk to a senior officer about Crozier and a subsequent visit to the ship by Modly, who told the crew Crozier was either "naïve" or "stupid" for distributing his message.

"They were visibly still upset about the secretary's visit so I walked them through what I knew, which really was not much more than what everybody else knew," Merz said, "I think they just needed to tell somebody about how much that hurt them and disappointed them."

Modly was forced to resign over those comments. Audio of his speech also leaked to media in which he used a profanity and some crew members were heard yelling back at him.

Merz was able to verify Crozier's immediate superior did not know he was sending the memo in which Crozier had urgently asked Navy leadership to evacuate sailors from the Roosevelt as the virus spread. Noting that, "I was not in his shoes," Merz offered his own caveated assessment of Crozier's actions pending the outcome of an ongoing investigation.

"I certainly don't question his motives. I think his motives were pure. He was looking out for his crew,"Merz said.

But Merz also noted all commanders have "a lot of tools available to be heard," adding "I am not going to second guess him at this point."

The investigation could be completed as soon as next week. Defense Secretary Mark Esper said he isn't ruling out the possibility that Crozier could be restored to command.

As of Saturday afternoon, 550 of the Roosevelt's roughly 4,000 crew members, as well as Crozier, had tested positive for the virus, according to a statement from the Navy. Nearly all of the crew has been tested, and 3,696 of them have now been moved ashore.

Merz said it is clear from the "heartfelt" departure videos that Crozier meant a lot to the crew. But his own reaction when he saw them was worry about how an event with no social distancing was allowed to happen.

"My immediate reaction was our job just got harder for us," he said.

This story has been updated with the number of sailors who tested positive for Covid-19, according to the US Navy.