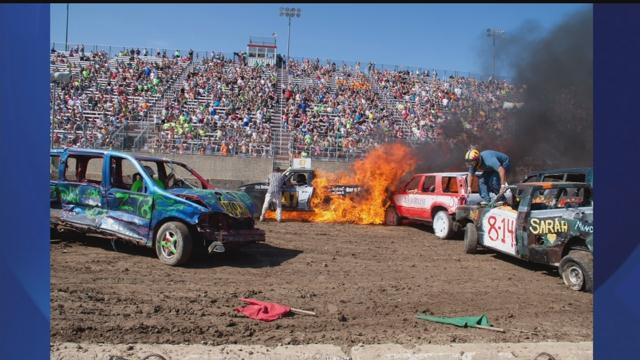 The organizer of a demolition derby saw the truck burst into flames and jumped into action, pulling the driver to safety. This all happened Sunday night at the Racine County Fair.

An event organizer says people come to the demo derbies because they want to see the danger but this year a show was put on with more drama than anyone expected.

\"When I turned around in the opposite direction there was a truck that was about half engulfed in flames,\" said Dennis Nelson, Jr, the event organizer.

Nelson tours the Midwest putting on demolition derbies and says crashes and airborne cars are an everyday occurrence.

But what happened Sunday night was not.

\"I ran up to the drivers side and he was in a panic, obviously as anybody would be. He was trying to get his seat belt off so I reached in and grabbed him and unbuckled it,\" said Nelson.

A witness says a fire started in the cab of John Vanhara's derby truck after a gas leak.

\"Another van was hit from behind and spewing gas all over the place,\" said a witness.

\"Junior\" sprung into action, as you can see in this exclusive video, battling flames that were quickly engulfing the truck.

\"It blew me about five feet away and blocked the window so the guy wasn't able to get out,\" said Nelson.

The grandstand was packed; 6500 people looking on in complete silence at what was unfolding right in front of their eyes.

With help from firefighters Vanhara was freed.

\"They hit the hood with water and my only option was to jump on the hood and pull the guy out. Then both of us just flopped down on the ground, which is what happened,\" said Nelson.

Forever thankful to his rescuer.

Vanhara suffered  minors burns to his back. Nelson came out with some burns on his arm but says he'd do it again in a heartbeat.
\"Listen its another day at the office for me,\" he said.

Although this was a very scary situation for all people involved people we spoke with say things couldn't have gone more smoothly and they're already looking forward to next year's event.