EXCLUSIVE: Chief Flynn Just Back from Washington on Mission to Get More Law Enforcement Resources 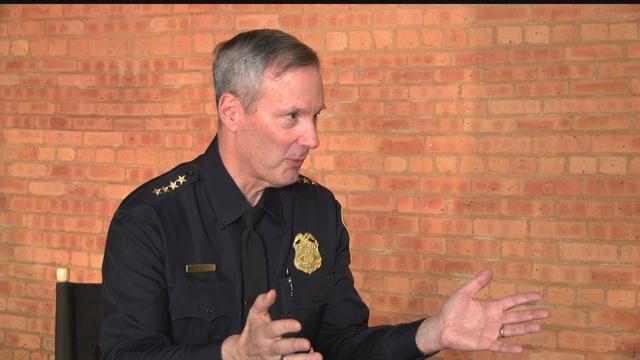 Chief Flynn is just back from Washington D.C. to visit with other member of  Violence Reduction Network Initiative.

The program is just a little more than a year old.  It aimed to move resources to areas who have crime and poverty issues.

The original cities were Detroit and Chicago. Chief Flynn insisted on having Milwaukee become a part.

It provides MPD access to the federal research network. Chief Flynn says it will give Milwaukee  a leg up in the competitive grant process.

"I  can't guarantee specific amount of money," Chief Flynn told CBS 58's Michele McCormack. "But we work in task forces with the DEA, the FBI, and ATF. Part of this initiative is that at the headquarters level to focus those three agencies on our priorities instead of the fed's priorities."

He thinks it will be most hopeful in the Center Street corridor which has two police districts in its boundary and generates a lot of violence.

"We made a lot of arrests in that area. But this allows us to have a joint effort that is a headquarters priority for them."

Chief Flynn says it shifts the measure of success from the amount of drugs you seized to how an impact was made in addressing violence.

Chief Flynn also discussed the  spike in auto thefts involving those 16 and under. He confirms that in the last five years there's been a 260% increase in juveniles arrested for stolen cars. About a quarter have been arrested at least two times already in the year.

"Quite often we pass the baton and it gets dropped."

But while expressing  dissatisfaction with the justice system, he does offer this qualifier for why so many young offenders are getting released, only to turn up a short time later in another stolen car.

"Bottom line is although we've had meetings to solve managerial problems we see there, the system is under staffed under funded and in some ways under managed. So, these juveniles experience nothing meaningful from the system. I'm not saying they should all go to jail.  The system's got to notice to have credibility. Right now the system has no credibility when it comes to its most important constituents and that's the young offenders."

Chief Flynn sat down for the interview on the eve of a listening session where young people are expected to speak out on their negative interactions with Milwaukee Police.

While Chief Flynn expects to hear back from some of the organizers, he will not be in attendance.

"I think the Coalition for Justice has a pretty specific agenda and they'll be careful who they suggest to speak to represent youth."

Nate Hamilton, the brother of Dontre Hamilton who was fatally shot by a former Milwaukee Police Office is a member of the coalition and is encouraging people to attend.

And when it comes to the Red Arrow Park shooting, the Chief says he's disappointed that  Hillary Clinton is continuing a false narrative on the campaign trail and using Milwaukee as an example of what's wrong with policing in America.

"For reasons known to those who want to be opportunists, this became a race issue.  I think it's unfortunate that candidate Clinton has decided to buy into that narrative. This is an election, a way to fire up the base. But it's got nothing to do with the truth of the issue of mental health, not race."

And when it comes to the external review that he requested he gives no mind to skeptics to his presence alongside those who have been brought in to analyze what he does as head of the force. He says it is not to exert influence. But emphasized that any review should be  a collaborative process.

"I know it's displeasing to some of our harshest critics that we didn't get sued. But the fact is there wasn't the data to support a pattern and practices lawsuit. But we opened ourselves up because. regardless of what the data says, trust is an issue in this community. We felt we should work with the Justice Department to allow them to come in and open our books and say there's  probably something we can do better. I'm sure they'll make recommendations that we're only going to be too happy to implement. We have nothing to hide."