EXCLUSIVE: CBS 58 Talks to Victim Shot While Waiting in McDonald's Drive Thru 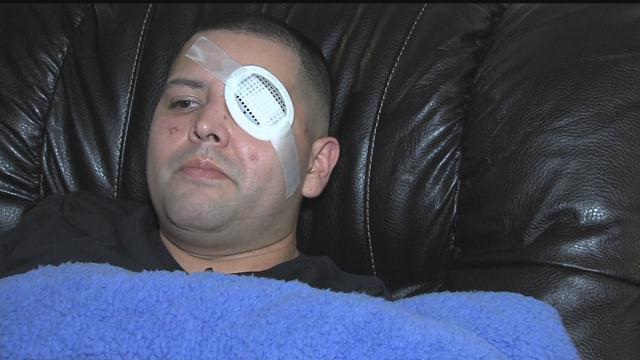 He thought it would just be another day. A Kenosha man took his daughter to a McDonald's one month ago. But police say his is ex-wife's new boyfriend opened fire on them.

He talked only to CBS 58's April Dovorany about that day and his long road to recovery.

Jaimie Vazquez says he never saw this coming, not even when the shooter was just a few feet away from him in this McDonald's drive through.

"As he  was coming out of the car I saw the gun in his hand and I was trying to say, 'Dad we need to leave,' but all that came out was 'No no no no no no!'

Though Jaime had never formally met his ex-wife's new boyfriend his 16-year-old daughter instantly recognized the man who blocked her dad in at the McDonald's drive through and feared the worst.

"All I remember is just him with the gun," said Jaime Vazquez.

Walking up to Jaime's window and firing rounds into his chest, shoulders and face, Cordel Smith later admitted to police he was shooting to kill saying he "felt a sense of relief..I was trying to get it over with at that point."

"He shot me right here and everything went black. I thought I was done. This eye right here went dark. In my mind I'm thinking I have a huge hole in my face," said Jaimie.

In his pain, throwing himself in front of his daughter.

"When he shot me in the mouth I was pretty much swallowing my own blood trying to say, 'Caitlyn are you ok??' I couldn't even talk anymore. So much blood," said Jaimie.

"Still in shock, I tried dialing 911 and I ended up pressing something before it and misdialed and he kept shooting my dad," said Caitlyn.

Caitlyn escaped out of the passenger side door. Her father ran inside McDonald's.

"And as I was running from the car to Mcfonald's all I could keep saying was 'I'm sorry babe, I'm sorry. Tell the kids I say I'm sorry because I thought I was going to die. I passed out and then came back and was hearing voices, her screaming 'that's my dad, that's my dad' but I couldn't actually see anything," said Jaime.

Jaime sufferd a collapsed lung, bleeding on the brain and permanent vision loss from his injuries. His fiance Erin says Jaime has had to adapt to a new way of living; she now has to help bathe, feed and clothe him.

"His dignity was taken away. He's hurt and he can't be the provider he was for his family," said Erin.

But even in his struggle, Jaime chooses to have faith.

"It makes me happy that I can spend time with my kids and my fiancé. I'm lucky that I'm here you know?" said Jaime.

Jaime can no longer work at his former job as a delivery driver, and the family says money is  tight, especially because of the expensive medical bills.

While the family is struggling financially they say what they need most is prayer.

But you can donate to their GoFundMe here: https://www.gofundme.com/7dggu8zz

There's also a fundraiser for Jaime with live music and a raffle at Coins Sports Bar in Kenosha on February 21st. Tickets for the raffle are $7 and for more information on the event you can call the bar at 262-652-5028