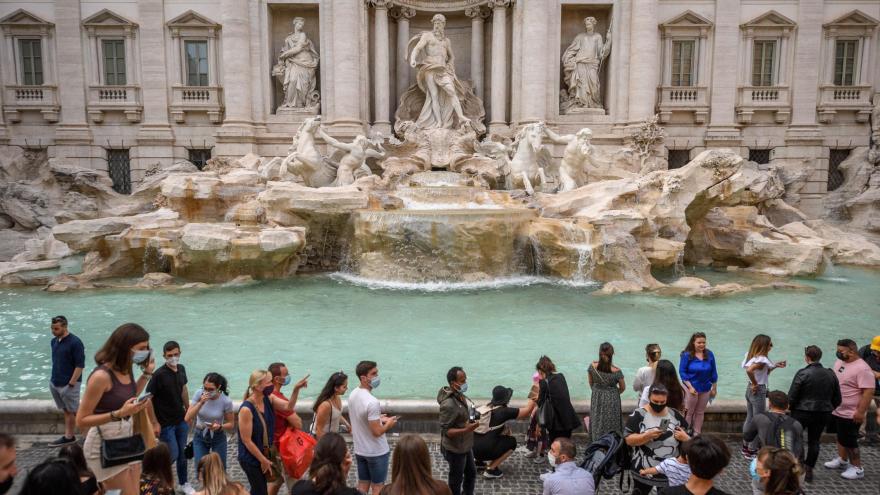 (CNN) -- The prospect of European travel for Americans has begun to diminish once more as countries adopt new measures in response to a recent surge in US Covid cases.

Earlier this week, the European Union announced it was dropping the United States from its safe list, advising its 27 member states to reconsider allowing entry to nonessential US travelers.

Many prime tourist destinations that welcomed back much-needed visitors from the United States earlier this year, have so far chosen to ignore the non-binding EU advice. Italy, the Netherlands and Sweden have become the first to impose new rules.

Beginning on September 4, the Netherlands says the United States will be designated a "high risk area," joining Israel, Kosovo, Lebanon, Montenegro and North Macedonia as fresh additions to this list, according to a government website.

While travelers from these and other high-risk countries will be allowed entry if fully vaccinated, they must still quarantine for 10 days. And as of September 6, they must also produce a negative Covid test.

Sweden, which had previously exempted US travelers from a ban on almost all non-EU arrivals, has also removed the country from its approved list, alongside Israel, Kosovo, Lebanon, Montenegro and North Macedonia.

The country said in a press release the measure would apply to all nonessential arrivals, whether vaccinated or unvaccinated, although those with Swedish resident permits who can produce recent negative tests could be exempted.

It added Swedish authorities were considering whether to allow fully-vaccinated arrivals from certain counties and would "return to this issue at a later date."

Italy, which was one of the first European countries to open its borders earlier this year, has also introduced new measures affecting arrivals from all destinations, including the US.

On August 31, it began requiring all visitors to show proof of a PCR or antigen Covid test taken within 72 hours of travel, regardless of whether they are vaccinated.

Those travelers who are not vaccinated or have proof of recovering from Covid must quarantine for five days on arrival and take a swab test, according to Italy's Ministry of Health.

It's unclear yet whether other European countries, many of whom have been banking on an influx of US visitor dollars to help revive their pandemic-battered tourist economies, will also revise rules.

Covid cases have been rising sharply in the United States throughout July and September, with the disease's Delta variant blamed for many new cases.