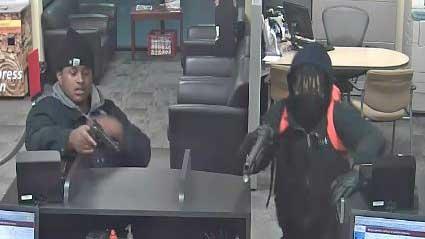 On Tuesday at approximately 11:30 AM, the TCF Bank located at 12850 W Bluemound Rd was robbed by two unidentified suspects, while a third suspect parked outside the front door in the getaway vehicle.

No weapons were discharged during the robbery and there were no injuries.  The suspects fled the scene with undisclosed amount of cash.

A reward is being offered for information leading to the apprehension of the robbery suspects.

Police said to not approach the suspects as they are considered armed and dangerous.

If anyone has any information on the identity of the suspects or suspect vehicle, please contact the Elm Grove Police at 262-786-4141.