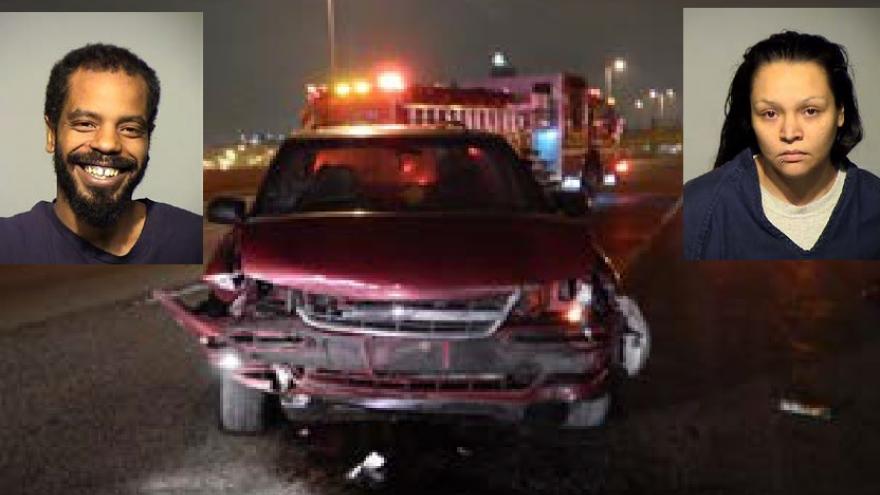 When deputies arrived they saw two adults standing outside a minivan with eight children ages 1, 2, 3, 5, 9, 10, 11 and 12. Several of the children required medical treatment for minor injuries. The driver, 30-year-old Milwaukee woman Amanda Martinez, also had a leg injury.

A witness on the scene said the van passed him at a high rate of speed and suddenly veered sharply and drove straight into the freeway retaining wall. He heard the driver yelling at the passenger asking why he would yank on the wheel. Deputies spoke to several of the children who corroborated that the passenger, 36-year-old Milwaukee man Ellis Toms, had been drinking in the car and arguing with the driver.One child said, “everybody was screaming for them to stop. When we got on the freeway he kept grabbing at the steering wheel. He grabbed it again and we crashed and then I blacked out.”

Martinez performed poorly on standardized field sobriety tests, and tested .088 on a breathalyzer test. She was arrested for OWI with Child Under 16 Years of Age in Vehicle, Disorderly Conduct, and 7 counts of Child Neglect. Only one child was restrained in a safety seat belt.

Toms was arrested for 2nd Degree Recklessly Endangering Safety and 7 counts of Child Neglect/Party to a Crime. He faces up to 15 years in prison, if convicted.

Sheriff Schmidt said, “It is unconscionable that two adults would drink to excess and take eight children in a vehicle with them. Their careless disregard for the safety of these children or anyone else on the road is appalling, and we will review this matter carefully and issue the most serious charges possible.”