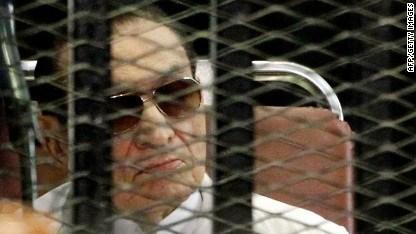 (CNN) -- In what many Egyptians called the trial of the century, a Cairo judge Saturday dismissed charges against former President Hosni Mubarak for the deaths of hundreds of protesters.

The court also found Mubarak not guilty of corruption.

Mubarak, who ruled Egypt for almost 30 years, was accused of \"inciting, arranging and assisting to kill peaceful protesters\" during the country's popular uprising in 2011. The 86-year-old had pleaded not guilty to the charges.

Saturday's rulings capped his second trial for the same charges. He was convicted of helping kill protesters and was sentenced to life in prison in 2012, but was later granted a new trial.

Mubarak wasn't the only defendant in the courtroom. His former Interior Minister Habib El-Adly and six of El-Adly's aides were also on trial for the deaths of 239 protesters in 2011. All seven of them were acquitted.

Mubarak told an Egyptian TV station on Saturday he \"didn't feel anything\" after the judge cleared him.

Asked about accusations that he ordered protesters to be killed, Mubarak told Egypt's Sada El-Balad TV by phone: \"I didn't commit anything.\"

\"I laughed when I heard the first verdict,\" Mubarak said of the original trial. \"When it came to the second verdict, I said I was waiting. It would go either way. It wouldn't have made a difference to me either way.\"

In January 2011, throngs of Egyptians filled the streets of Cairo to decry the country's poverty, unemployment and repression. Protesters called for Mubarak to step down, but were met by a fierce and often violent government crackdown.

Since Mubarak stepped down in February 2011, the ailing former ruler has appeared in court numerous times for a variety of charges -- sometimes wheeled in on a gurney. He often lay in a cage used to keep defendants during court proceedings.

Judge Mahmoud El Rashidy said he dropped charges against Mubarak because Cairo Criminal Court didn't have the jurisdiction to try him for the protesters' deaths.

The judge said the case that prosecutors initially referred to the court listed only El-Adly and his aides as defendants -- not Mubarak himself.

But after mass protests pressured the prosecutor general to question Mubarak, a second referral was made to the court, and the two cases were merged into one.

Lawyer Hoda Nasralla, who represents the families of 65 slain and injured protesters, said the inclusion of Mubarak in a second referral should have trumped his exclusion in the first.

\"The judge shied away from directly acquitting Mubarak even though he was accused of conspiring with Adly, and Adly was acquitted,\" she said. \"The judge resorted to formalities instead.\"

Though Mubarak was not convicted on any charges Saturday, he still won't go free anytime soon.

In May, a Cairo court sentenced him to three years in prison for embezzlement. His sons Gamal and Alaa were sentenced to four years each on the same charge.

All three were convicted of embezzling $18 million that was allocated for the renovation of presidential palaces. The Mubaraks have insisted they are not guilty.

Mubarak is expected to be released in the coming months, since his three-year sentence includes time already served.