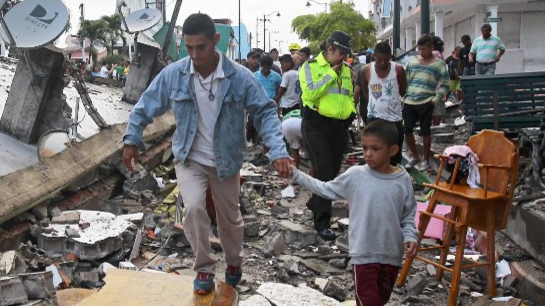 (CNN) The catastrophic earthquake that destroyed buildings in Ecuador on Saturday became far more devastating Sunday, when the death toll soared to 235 -- and it's expected to rise.

"It was the worst experience of my life," survivor Jose Meregildo said Sunday about the tremors that violently shook his house in Guayaquil, 300 miles away from the quake's epicenter.

"Everybody in my neighborhood was screaming saying it was going to be the end of the world."

The magnitude-7.8 earthquake hit Saturday night as it buckled homes and knocked out power in Guayaquil, Ecuador's most populous city, authorities said. Emergency officials recovered one body from the scene of a bridge collapse there.

"Many highways are in bad shape, especially in the mountainous area because it has been raining recently due to (the) El Niño weather phenomenon."

A state of emergency is in effect for six provinces -- Guayas, Manabi, Santo Domingo, Los Rios, Esmeraldas and Galapagos. Authorities urged those who left their homes in coastal areas to return after a tsunami alert was lifted.

Ecuadorian President Rafael Correa was expected to arrive Sunday in the country after returning from a Vatican conference in Rome, the vice president said in a televised address.

The deadly earthquake moved the Vatican to speak out on the devastation.

During his Sunday prayer, Pope Francis asked for those present to pray for the people affected by the earthquakes in Ecuador and Japan.

"Last night a violent earthquake hit Ecuador, causing numerous victims and great damages," Francis said. "Let's pray for those populations, and for those of Japan, where as well there has been some earthquakes in the last days. The help of God and of the brothers give them strength and support."

Ecuador's Interior Ministry ordered all nightlife venues in affected areas closed for the next 72 hours.

Also, the nation's soccer federation said it has suspended the remaining matches of the current round of the Ecuadorian championship.

All mobile operators are allowing free text messages for customers to reach out to loved ones in Manabi and Esmeraldas provinces, Glas said.

In a race to help residents, Ecuador deployed 10,000 soldiers and 4,600 police officers to the affected areas, he said.

Two portable hospitals have been mobilized to the cities of Pedernales and Portoviejo, authorities said.

The tremor was centered 27 kilometers (16.8 miles) southeast of the coastal town of Muisne, according to the U.S. Geological Survey.

It's the deadliest earthquake to hit the nation since March 1987 when a 7.2-magnitude temblor killed 1,000 people, according to the USGS.

The earthquake left shoppers shaken in Guayaquil. Video footage from a store showed kitchen utensils swinging back and forth as some items tumbled off shelves.

Some areas in the city lost power.

There were no immediate reports of damage or injuries in the capital of Quito, 173 kilometers (108 miles) from the quake epicenter.

An earlier warning for other nations with coastlines on the Pacific was canceled.