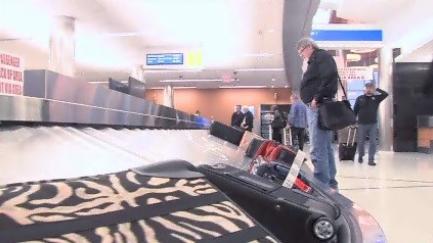 As bags arrive on the carousel, some people are more nervous than usual as they walk through General Mitchell International Airport.

\"It should make anyone feel a little nervous,\" said Dennis Lyman, an airport patron.

After a Dallas nurse who tested positive for Ebola reported she traveled out of state to Cleveland, some worry about how quickly the virus could spread.

\"It's scary, it's something to be taken very seriously,\" said Lyman.

\"These people who've come up with symptoms, they knew what to do, and how to report themselves,\" said Bishop.

Despite the Ebola scare, Bishop says back in Texas, he does not see much panic.

\"You have jokes about that,\" said Bishop, \"but I'm not really sensing a lot of tension in the area for that.\"

What's keeping some people calm-- knowing they're more likely to get the flu, than Ebola.

\"It's a scare,\" said Carol Aulwes, another airport patron, \"just like any other epidemic.\"

Those who err on the side of caution-- say more needs to be done to keep everyone safe.

\"It seems like the precautionary measures we have in place are not doing their job, so we're going to have to fix that,\" said Lyman.

Officials at General Mitchell International Airport say right now, CDC and TSA have not instructed them to do anything different after the Ebola scare.