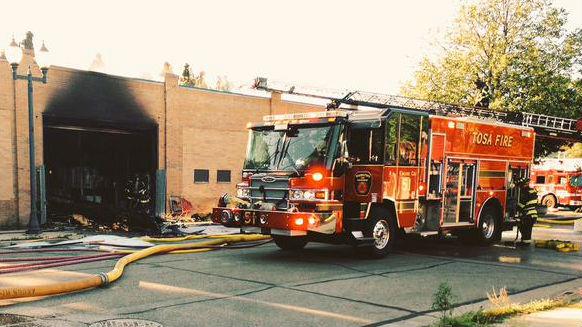 Wauwatosa Fire Department and several other agencies responded to a fire at the Sherwin-Williams store on North 67th and North Avenue in Wauwatosa.

The Wauwatosa fire chief told CBS-58 they received the call around 6:30 AM Tuesday after someone driving through the area saw smoke coming from the building.

At one point, the flames could be seen emerging from several spots on the building's roof.

Streets were also blocked off for more than two hours as crews doused the flames and hot spots.

Many neighbors could not get to work Tuesday morning due to closures on the busy stretch, and for some, the fire is too close for comfort.

\"Way too close for comfort, I mean you hate seeing it happen anywhere, but especially a business where all the guys are so helpful, they're so accommodating,\" said Kevan Oberdorf, who lives nearby, \"you just think about all the things that must be going through their head, as they awoke to come to work this morning.\"

Investigators are still looking into the cause of the fire. No one was hurt.