E-cigs, are they safe? 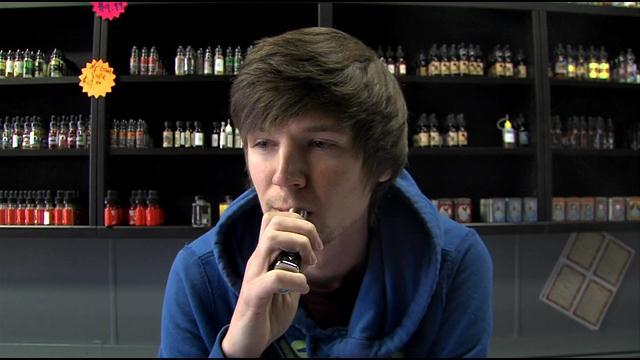 MILWAUKEE – They are seen as the healthy alternative to smoking, they're called e-cigarettes, and researchers say big tobacco companies are jumping onto the bandwagon and targeting their marketing towards children.

Adam Skonecki started using e-cigs when he was 19, bought in, “It tastes like those old fruit snacks that have cream on the bottom.\"

He got so into e-cigs, he now sells them at a West Allis vapor shop.

Skonecki says, “I didn't know anyone who did at the time of high school, now I see people come in here I went to high school with and they buy stuff.\"

He says e-cigs are a healthy alternative to smoking- because the ingredients are nicotine and other ingredients found in food.

“I don't really have any concerns with it.\"

But you can't convince Dr. Michael Fiore, at the Center for Tobacco Research and Intervention at the University of Wisconsin's Medical School.

Dr. Fiore says three cigarette companies make up 75% of the 2-billion-dollar e-cigarette market and says tobacco companies are targeting children in movies and TV. It's not illegal because e-cigs are not regulated by the FDA like cigarettes are.

Dr. Michael Fiore says, “The concern with e-cigarettes is that they're going to be a gateway to children becoming addicted to nicotine and even to cigarettes.\"

He says tobacco in teens can change a child's brain for life. He says other chemicals like propylene-glycol are concerning.

“There is some data that suggests when that chemical is heated at a high rate, that it can transform into other chemicals that can be hazardous.\"

Dr. Fiore says if they become regulated, tobacco companies will quickly jump to a lawsuit. In Wisconsin, state lawmakers have even considered adding vaping, or e-cigs to the Wisconsin smoking ban. It's something State Representative Joel Kleefisch is adamantly against.

Kleefisch says, “There's really no strong evidence that there is any harm from water vapor. If we learn there is a massive harm, I trust the business owners to make the right decision about if I allow them in their establishment.\"

Until they are regulated, people like Adam Skonecki will continue to sell e-cigs to people like Erin Buss.

Buss says, “I think it's a lot healthier because I don't cough as much, I don't have throat aches, I just hate the smell of cigarettes, the way your car smells.\"

And Skonecki says he doesn't think there's enough research to make him put down his e-cig.