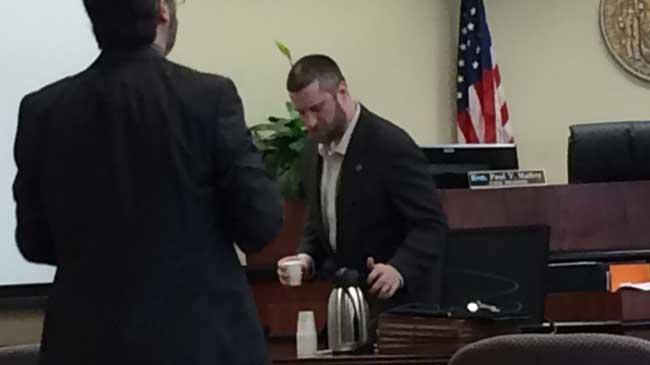 It was a bizarre start to Dustin Diamond's trial Wednesday morning.

Before jury selection, the Ozaukee County District Attorney inquired about a car parked in the parking lot that had \"good luck to Dustin & Amanda\" written on its back window.  The district attorney wondered if it was associated with any of the attorneys in the case.

The judge, seemingly surprised by the question, asked if anyone knew who owned the car. Thomas Alberti, Diamond's attorney, admitted it was his car with that message written on the back window.

The judge was not happy with that and said it was inappropriate for a jury trial.  He told Alberti he had five minutes remove it.

Alberti briefly commented on why he had the message on there as he wiped it off. He said it was a show of support for his clients.  But admits it was a mistake.

\"They're just good people,\" Alberti said. \"I want to put on a good defense for them. What they did wasn't wrong, we're going to prove that in court and no more messages on cars. We'll do it in the courtroom.\"

The judge said he's never seen a lawyer do such a thing and scolded Alberti when he came back in the courtroom.

Diamond is facing a felony, and two misdemeanor charges stemming from a bar fight in Port Washington. It happened Christmas night. Diamond says he was defending his fiancée - Amanda Schutz, who's also facing a disorderly conduct charge. During the fight, one man was stabbed. The man didn't realize he was stabbed until after leaving the bar.

CBS 58 will have full coverage.