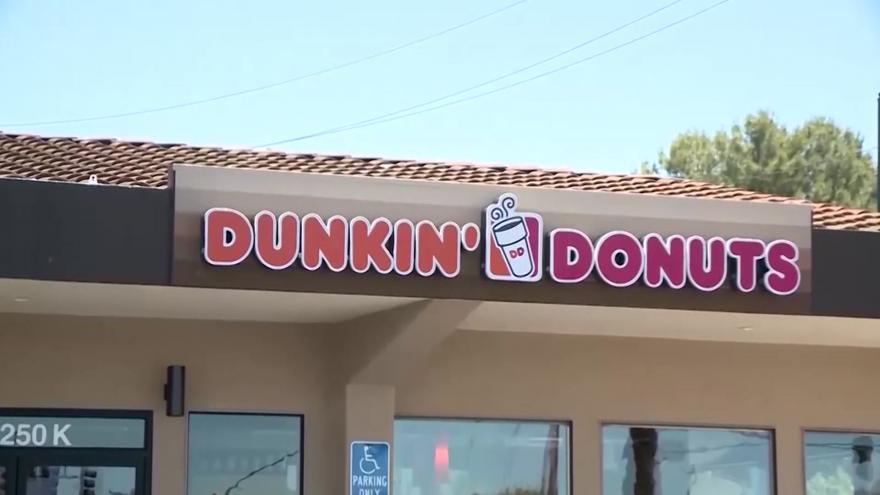 (CBS NEWS) -- Doughnuts remain on the menu, but Dunkin' Donuts is shortening its name to "Dunkin'" to reflect its increasing emphasis on coffee and other drinks as well as sandwiches.

Earlier this year, the company tested the new name at a store in the Boston suburb of Quincy. The change will officially take place in January, when the Dunkin' name will start appearing solo on napkins, boxes and signs at its U.S. stores. The name change will eventually be adopted by international stores.

Canton, Massachusetts-based Dunkin' Brands has more than 12,500 restaurants globally. The 68-year-old chain says its new logo will still have the familiar rounded font and orange-and-pink color scheme that the company has used since 1973.

Dunkin' says the name change is one of several things it's doing to stay relevant to younger customers, including adding dedicated mobile ordering lanes.

The company also is testing a "less is more" strategy in about 1,000 of its 9,000 U.S. locations by paring its doughnut selection. The streamlined stores will sell a minimum of what Dunkin' calls 18 "core" doughnuts, down from about 30 varieties. Dunkin' said in a statement that, depending on how customers respond, it may pare down its selection nationwide.

The company's sales and profits have grown steadily in recent years and its stock price is up more than 14 percent so far in 2018. While overall U.S. store traffic was down in the second quarter of this year, the company noted that but revenue was up thanks to sales of higher-margin iced coffee drinks and breakfast sandwiches.

"By simplifying and modernizing our name, while still paying homage to our heritage, we have an opportunity to create an incredible new energy for Dunkin'," the company's chief marketing officer, Tony Weisman, said in a statement.

But the name change could be a big mistake, says Laura Ries, an Atlanta-based marketing consultant.

Ries says "Dunkin'" eventually won't mean anything to younger customers who haven't grown up with the full name. Specific words are easier for people to remember and conjure emotional connections, she said. Having "Donuts" in the name is also easier for people in overseas markets who may not know what "Dunkin'" means.

Ries said other brands — like KFC and DQ, which used to be Kentucky Fried Chicken and Dairy Queen — have made similar mistakes. They wanted to take the emphasis off fried food and ice cream, she said, but new generations don't know what the letters stand for.

Even if people think doughnuts are unhealthy, they know they can just get coffee while they enjoy the doughnuts' smell, she said.

"There's nothing wrong with still having 'Donuts' in your name," she said. "Long term it was helping them, giving them a brand identity that was the opposite of Starbucks."