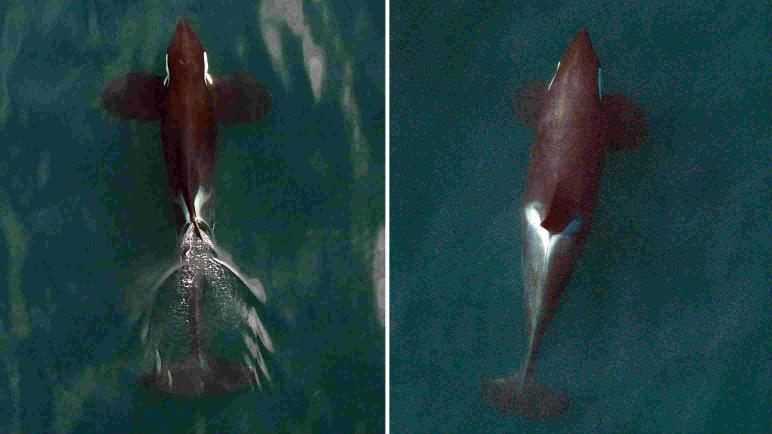 That's what researchers from the federal government's NOAA Fisheries and the Vancouver Aquarium were able document using an unmanned aerial vehicle (sometimes called a drone) flying over the Johnstone Strait off British Columbia earlier this year.

The researchers said it was the first time a UAV, in this case a custom-built hexacopter dubbed Mobly that carried high resolution cameras, to record the behaviors and health of killer whales.

The mission followed British Columbia northern resident killer whales which are considered threatened under the Canadian government's Species at Risk Act, according to a NOAA Fisheries release. The UAV flew at 100 feet above the whales so as not to disturb them and got pictures of 82 whales during the 13-day mission in August.

The researchers were trying to determine the health of the orcas by seeing if they were getting enough food, a task they accomplished by noting whether the creatures were skinny or fat.

In a video, NOAA's Southwest Fisheries Science Center biologist John Durban points out the contrast between the skinny whale, known as A-37, on the left and the healthy A-47 on the right.

He then points out how A-37s pectoral fins are widely extended to provide extra lift as the whale is lacking the fat to give it normal buoyancy.

And then the tragedy.

\"We flew over him a couple of times and got these incredible images, and then while we were up there, he disappeared and he stopped swimming with his brother and has almost certainly passed away,\" he said.

Lance Barrett-Lennard, who head the Vancouver Aquarium's Marine Mammal Research Program, wrote in a blog post on why the UAV made a big difference in showing the weight of the whales.

\"It turns out when killer whales lose weight they replace much of the fat in their blubber layer with water in order to maintain a firm, streamlined shape. They don't look thin from a side view until they are drastically malnourished and a large indent develops behind the blowhole, Barret-Lennard wrote.

He wrote that the researchers noted weight loss in one other orca, I-63, a female that had lost a calf earlier in the year.

\"Her subsequent death made us wonder if she had been sick or injured,\" Barret-Lennard wrote.

Durban said the whales themselves take note of the loss of one of their pod. Other whale researchers monitoring acoustics in the area of the aerial study noted increased calling from A-46, A-37's brother, shortly before and after A-37 disappeared.

\"It's interesting whether those calls were related to his brother, whether he was looking for him or whether he was telling others he was gone. We don't know,\" Durban said. \"You know, they do family better than we do. They have to notice the absence of an animal that's swum with them their whole life, and I think more than notice it, I think it can have a big effect on them.\"

But there was plenty to be happy about.

The aerial views also enable the researchers to determine which whales were pregnant.

Pointing out one picture, Durban says, \"You can clearly see that she has her maximum girth just behind the dorsal fin, just like us, you know, when we get pregnant. The belly of the mother starts to get big below the ribcage. That's what we see here.\"