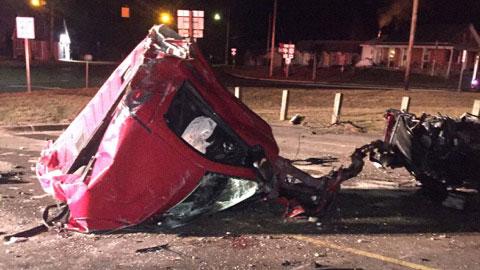 MOTTVILLE, Mich. (ABC 57)- The driver of a pickup truck was hospitalized after his vehicle struck a building and several trees Sunday night in Mottville Township, Michigan.

Michigan State Police say a 25-year-old from Goshen was driving a 2005 Dodge Ram westbound on US12 when he lost control of his vehicle.

The truck struck a curb, lost a wheel, then struck the Jaywalker's Restaurant building on US12 near M103.

The truck then rolled over, struck several trees and came to a rest in the parking lot of Jaywalker's.

The tire struck a vehicle parked in the restaurant parking lot.

The driver was taken to Bronson Hospital in Kalamazoo. He is listed in good condition.

Alcohol is believed to be a factor in the accident, police said.