Dream playground could become reality-- with your help 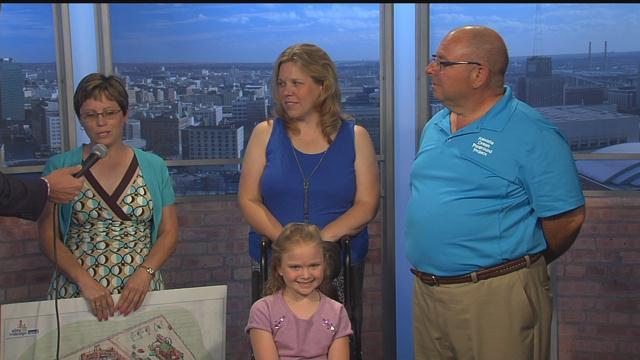 People in our community want to build the fully accessible playground of their dreams, but need your help.

Members of the Kenosha Dream Playground Project joined us live on the CBS 58 News at 4 to talk about trying to fill a need, because all of the playgrounds in Kenosha pose insurmountable difficulties for children with disabilities. Children that use a wheelchair or have difficulty walking cannot climb a ladder to experience the thrill of a slide or travel through wood chips to get to a swing.

These simple pleasures of childhood are unattainable for some children, like 7-year-old Amity Forsythe. Amity has Spina Bifida and is in a wheelchair. Her mother says \"Amity is at an age where she should be out playing with friends. Right now she has to sit on the sidelines,\" Jaime Forsythe said. So the Kenosha Achievement Center, the Dream Playground Project, and the City of Kenosha are working together to build a fully accessible and inclusive playground located in Petzke Park (31st Street & 14th Avenue).

The Dream Playground Project spent three years raising more than $650K to build this playground, and a grant is kicking in $350K more.

While the money is raised to build the playground, they need your help to construct it. \"We are about 60-percent full, but we still need more people to sign up,\" Jaime Forsythe said.

It will take 10 days and roughly 3,000 volunteers to build the Dream Playground. Construction will happen in two phases, one from August 20 – 23, 2015 and the second from September 7 – 12, 2015.  You do not have to be a skilled carpenter to help with construction. \"We'll take skilled trades, we'll take somebody that can sit there and check in volunteers. There is absolutely a job for everyone,\" Scott Gordon said.