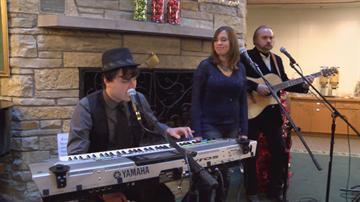 MILWAUKEE---For 25-year-old Eric Look, there's no better feeeling than hearing his own song play on the radio. His song is called \"This Christmas Day\" and it's now getting air time in radio stations across the country, including, 1290 Martini Radio in Milwaukee.

It's a dream come true for Eric, who's been playing the keyboard since he was three-years-old, the same year he was diagnosed with Autism.

\"It's such an accomplishment and we're so thankful for the radio station to play it ,\" said Eric's mom, Debbie Look.

Music comes naturally to Eric, according to his mom. Even though he faces challenges with sound sensitivity.  \"He has a lot of obstacles even to this day that we are working through and he tries his hardest... he has such an easy talent with music,\" said Debbie.

Such talent, that he's being asked to perform with his band all over the state of Wisconsin. The Milwaukee Brewers even invited him to sing the National Anthem next season.

Joe Banas, Eric's uncle, is also his publicist. He says the reason Eric's dream is coming true is because he has an inspiring story to tell.

\"There are so many people affected by autism and they don't really share it with you but when they see Eric, they come up to us and Eric is such an inspiration to those people and their families,\" said Banas.