Dramatic spin out caught on camera 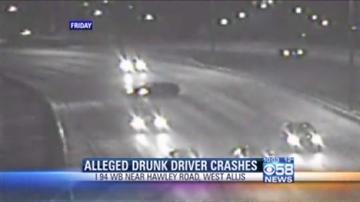 WEST ALLIS-Department of Transportation video shows a spin out as it happened late Friday night on I-94 near the Hawley exit.

The driver sped off the roadway, bounced off a chain link fence and according to responding deputies registered a .11 on a breathalyzer.

Initial reports say the man broke through the fence, and hole in the fence was visible at the scene, but the video shows the car clearly going back up onto the interstate.

Turns out it was the man's fifth OWI offense.

A second car lost control moments later, but that driver avoided a collision.

It happened Saturday night on I-94 near Ryan Road.

The deputy avoided serious injury after his squad was hit while he was in the distress lane.

He was behind another squad and both had their lights on, while a tow truck crews tended to a car in the ditch.

A driver avoiding a car in front of him that lost control wound up ramming the squad.

That driver will be cited for following too closely according to the Oak Creek Police Department.