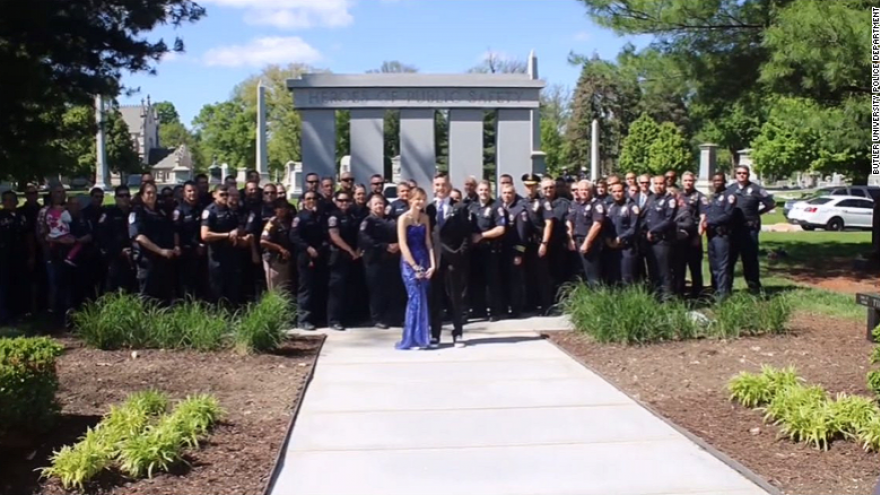 (CNN)Sierra Bradway had planned to take her prom photos at the gravesite of her father, an Indianapolis police officer who was killed four years ago in the line of duty.

She had no idea that anyone, besides her date and a photographer, would be there.

But when she and date Brock Spayd arrived at Indianapolis's Crown Hill Cemetery on Saturday, they were greeted by dozens of police officers who had come to help pay their respects.

The plan was set in motion by Brock's mother, a captain in the Marion County Sheriff's Office, who learned of Sierra's cemetery visit and called upon officers from the Indianapolis Police Department and other regional departments to help make the teen's prom more special.

A video posted on Facebook shows a stunned-looking Sierra stepping out a white SUV to find two police officers on horseback and a crowd around her father's grave.

"There were a lot of laughs, some tears, but most importantly, there was love," said the video, posted by Indianapolis Police. "Sierra, we know your father is smiling from heaven. Know that your Blue Line Family will always be here for you."

Sierra's father, Officer Rod Lee Bradway, was ambushed and shot six times on September 20, 2013, while entering an apartment after hearing a woman screaming for help. CNN affiliate CBS 4 reported his response was credited with saving the lives of the woman and her child.