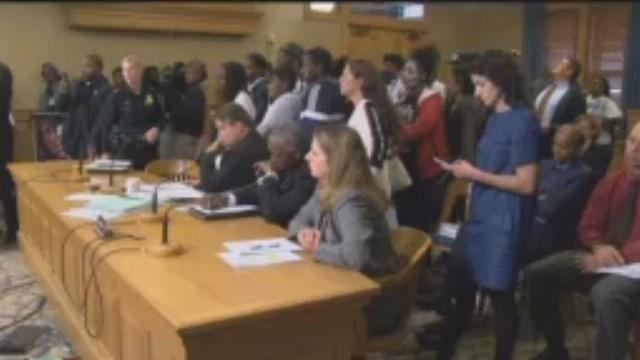 The family of the man shot and killed by police in Sherman Park protested today, and they didn't confine themselves to the streets.

It all started at 23rd and Wisconsin, with Sylville Smith's brother Sedan leading this push for justice.

"There's some shadiness going on. There's some betrayal to the community going on there," said Sedan Smith.

Demanding that the District Attorney release the video of when officer Dominique Heaggan Brown shot and killed Smith on August 13.

Heaggan Brown was recently charged with two counts of sexual assault for raping two men. Still, no decision made on the Smith case.

"We're standing up against this and we're not having it no more," said Smith's cousin Thaddeus Ashford.

Dozens marched nearly two miles to City Hall, wearing face paint and imitation blood in a protest they call the 'Walking Dead' -- interrupting a budget meeting held by members of the Common Council, who the family believes has remained silent.

That's when the conversation started, and people started getting some answers.

"They system is crooked, ain't no doubt about it. But at least we're here to fix it," said Alderman Russell Stamper.

"As a woman with two black boys, I take this issue personally. Because I don't want them growing up fearing the police. Rest assured, you have my support, and of course I will sign that and if I need to go down there I will do so," said Alderwoman Chantia Lewis.

"I am calling on Milwaukee County District Attorney John Chisholm to release the video footage of the officer-involved August 13th shooting of Sylville Smith.
The Milwaukee Police Department video is clearly a public record, and it should be released for the public to view. "

CBS 58 reached out to the DA's office and have not heard back.