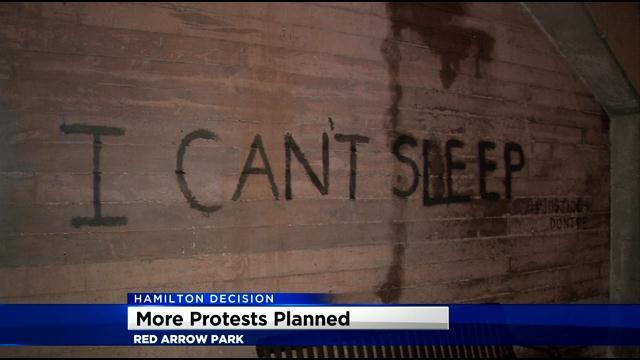 The Milwaukee County district attorney's decision is in, but the fight for justice in the shooting death of Dontre Hamilton wages on.

The Coalition for Justice is planning another demonstration today at 5 p.m. at Red Arrow Park, also referred to as ground zero for protests.

Protesters left behind their stamp of disapproval regarding the no charges announcement after their march ended Monday night. On a wall at Red Arrow Park, read two messages: \"I can't sleep\" and \"hands up.\"

The graffiti remained there overnight until it was removed by the county parks department early Tuesday morning. Officials tell CBS 58 mud was used to write the messages, making it easy for crews to remove them with hot water and soap. Crews also trashed protest signs left behind near the red arrow statue.

A spokesperson said it's the departments job to keep the park clean and their actions are no indication protesters have worn out their welcome.

Red Arrow Park is a public place, protesters have stayed peaceful and the parks department expects that to continue as demonstrators move forward in their fight for justice.

The county parks department also said it has had no complaints about the Hamilton protests from people enjoying the park, including the Christmas trees and the ice rink.

Slice of Ice is open Tuesday until 10 p.m. The Starbucks is open for business as well. Both both closed Monday amid the decision.