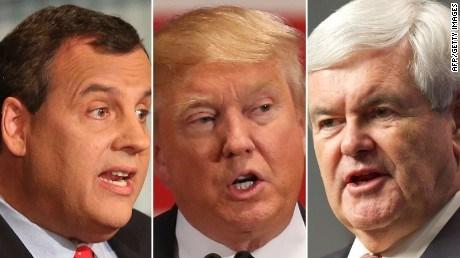 Christie -- a former Trump rival turned top defender -- has received the official paperwork for the vetting process, according to a source with knowledge of events. And Gingrich is being "seriously considered" for the job, a Trump adviser said.

Trump has said he intends to announce his vice presidential nominee at the Republican National Convention in July in Cleveland.

In choosing either Christie and Gingrich, Trump would satisfy his desire for someone with political experience who could help him advance his legislative agenda through Congress.

The New York Times was first to report Christie's vetting. The Washington Post reportedThursday evening that Gingrich was also being vetted, with Sens. Jeff Sessions, R-Alabama, and Bob Corker, R-Tennessee, also emerging as final contenders, but a source very close to the campaign said the Post's report was inaccurate. The source added, however, that a surprise choice could also be in store.

Though Christie ran against Trump in the GOP primary, the two have been long-time friends and Christie quickly endorsed Trump and became a reliable presence at his events after dropping out of the race. The New Jersey governor has not only been one of Trump's highest-profile surrogates, continually defending him against critics, but also one of his closest behind the scenes advisers, according to sources familiar with the relationship.

Trump, speaking with Concord, New Hampshire-based CNN affiliate WBIN-TV on Thursday demurred when he was asked whether Christie or former Massachusetts Sen. Scott Brown were on his running mate shortlist.

"Well, they're both good guys. I don't want to say shortlist but certainly they're great people," Trump said. "Scott was a very early supporter and Chris was very early after he got out. And they're certainly people I want involved."

For Christie, it has been quite a departure from what he initially sought out to do in 2016: win the GOP nomination. Blunt, with a big personality and a history of electoral success in a reliably blue state, Christie was once seen as a -- or perhaps the -- front-runner for the GOP nomination. Wounded by the fallout from revelations related to top aides deliberately closing lanes on George Washington Bridge as a form of political retribution, Christie still mounted a 2016 bid. In it, he wasn't afraid to take a few shots at Trump, though he was always quick to point out that he and his wife, Mary Pat, were long time friends of the New York billionaire.

"Showtime is over, everybody," Christie said while campaigning in New Hampshire in January. "We are not electing an entertainer-in-chief. Showmanship is fun but it is not the kind of leadership that will truly change America."

For a brief period at the end of 2015, Christie appeared to have righted his campaign, only to see it come apart under withering attack ads in the lead up to the New Hampshire primary. A disappointing finish in the state led to the end of his run, and, a few weeks later, to the endorsement of Trump. It was a move surprised -- and even angered -- many of the players inside his presidential campaign, sources say. One said the move was "such clear careerism -- this wasn't the man I signed up to work for."

Yet Christie has carved out an integral role inside Trump's orbit. He's operated, aides and advisers say, as a sort of all-purpose counselor of sorts to Trump in recent months -- part strategist, part sounding board, part friend, and often (perhaps to the surprise of many in his home state of New Jersey), a calming voice of reason.

"It's fascinating that I'm now the person that can speak my mind without offending anyone," Christie told reporters earlier this month.

When Trump was getting chastised by others in the GOP for his criticism of a federal judge over seeing a Trump University lawsuit, Christie said the billionaire was perfectly justified.

"In the end, there are always going to be conflicts regarding civil lawsuits. People are always going to express their opinions. Those are Donald's opinions, and he has a right to express them," he said. "I can guarantee you that, you know, people who are going to vote today in (New Jersey) and people who are going to vote in November are not going to make their decision based upon this kerfuffle."

He added: "I've known him for 14 years and Donald Trump is not a racist."

Behind the scenes his role was more robust -- he spent hours that day at Trump Tower, helping Trump craft a statement designed to put the issue behind the campaign, and sticking around to help him craft a subsequent speech.

Christie has also been a top recruiter for Trump -- both on the endorsement and fundraising side of the campaign. He's been a regular caller to top GOP donors and activated his own network to try and bolster Trump's moribund fundraising operation. The former head of the Republican Governor's Association, he's also regularly been in contact with GOP governors on the fence -- or off it on the side of #NeverTrump -- regarding Trump's candidacy. The calls and meetings are described as cordial, even in cases where the answers are no. But one message has been clear: Trump is going to win -- get on board now.

It's advice Christie himself took and could now benefit from more than anyone. He was Trump's biggest endorsement at a crucial moment in the campaign and that has sparked talk about any number of possible positions inside a Trump administration. He has been the focus of vice presidential speculation for some time, leaving the possibility open when asked by reporters.

That has led to no shortage of questions about Christie's intentions with that endorsement, both among unaffiliated GOP officials, but also former aides. And it hasn't always been a smooth process. There was the press conference where an entire Twittersphere jokingly wondered whether Christie had been taken hostage. ("I want everyone to know for those who were concerned: I wasn't being held hostage," Christie told reporters afterward.)

There was the moment it appeared his wife -- one of Christie's top political advisers -- appeared to roll her eyes at a Trump attack on Clinton during another press conference. Then Trump, during an event scheduled to help Christie retire his campaign debt, appeared to jab the New Jersey governor about his weight, saying: "You're not eating Oreos anymore, are you? No more Oreos for either of us, Chris. Don't feel bad." There's also been Christie's own political standing -- by May, his approval numbers were down nearly 40 points from their high in November 2013.

Christie for his part, has brushed all of those issues aside and maintained his endorsement was contingent on one thing: Trump represents the party's best chance to defeat presumptive Democratic nominee Hillary Clinton. Whatever his reasons, this much is clear: Christie is all in.

One adviser who spoke with CNN described Christie as a consigliere of sorts. Late night phone calls aren't rare -- Trump bouncing ideas and strategies off of Christie, complaints as well. But he also listens, this adviser added. That, the adviser said, may be the most important takeaway: Donald Trump, as much as Donald Trump can, listens to Chris Christie.

Gingrich emerged early in the 2016 cycle as one of Trump's most vociferous defenders, especially on cable television, where the former speaker has become one of the more colorful pundits. A longtime Washington fixture, Gingrich has deep ties to the nation's leading lobbyists and has long fashioned himself as a political historian.

Gingrich re-activated his political touch during his 2012 presidential run, when he ran a spirited, at times scorched-earth campaign against eventual nominee Mitt Romney. Gingrich won plaudits in the primary for excoriating the media, most prominently at a number of Republican debates.

Yet despite his unmistakable position as a Washington insider, Gingrich was one of the earlier DC elites to repeatedly defend Trump. And his work as a surrogate has long earned him a place on handicappers' list of those who might serve as Trump's No. 2.

But he said as recently as Sunday that he had not been formally asked to be considered.

And some thought his positioning in the Trump veepstakes was weakened by his criticism over Trump's recent attacks on a federal judge with Mexican heritage who is overseeing a lawsuit against Trump University. Gingrich called Trump's language "completely unacceptable."

"I thought it was inappropriate what he said," Trump said of Gingrich at one point, adding that he was "surprised" he would say so.