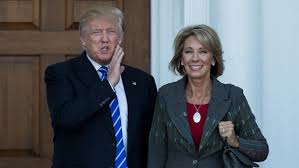 “Betsy DeVos is a brilliant and passionate education advocate,” Mr. Trump said in a statement Thursday. “Under her leadership we will reform the U.S. education system and break the bureaucracy that is holding our children back so that we can deliver world-class education and school choice to all families.”

DeVos called it an “honor” to accept the president-elect’s nomination. “The status quo in education is not acceptable,” she said in a statement. “Together, we can work to make transformational change that ensures every student in America has the opportunity to fulfill his or her highest potential.”

DeVos is an education activist from Michigan who has also chaired the state’s Republican party. She currently serves as chairwoman of the American Federation for Children, a school choice advocacy group. She and her husband also head up the Dick and Betsy DeVos Family Foundation, which has supported projects like the West Michigan Aviation Academy, a public charter school in Grand Rapids and the Compass Film Academy, a Christian film school in Michigan. The billionaire DeVos family also owns the NBA team, the Orlando Magic. Dick DeVos’ father founded Amway.

On Common Core, education standards that are highly unpopular among the president-elect’s supporters, Devos says she herself does not back the standards. On her website, Devos said she is “certainly” not a supporter, “period.”

“I do support high standards, strong accountability, and local control,” her website reads. “When Governors such as John Engler, Mike Huckabee, and Mike Pence were driving the conversation on voluntary high standards driven by local voices, it all made sense...However, along the way, it got turned into a federalized boondoggle.”

(DeVos, however, currently serves on the board of the board of the Foundation for Excellence in Education, an organization founded by former Florida Gov. Jeb Bush that promotes the education standards.)Mr. Trump has fervently vowed to abolish Common Core while on the campaign trail, calling it a “disaster” for parents and children alike. The president-elect has also expressed an interest in cutting the Department of Education because it has “been taken over by the bureaucrats in Washington.”

At least one conservative education group has already criticized the Michigan native ahead of her nomination over Common Core. The American Family Association earlier this week called it “alarming” that Mr. Trump might appoint a Common Core supporter to the position.

Others have praised the DeVos pick, like former Trump rival Jeb Bush. In a Facebook post, the former Florida governor wrote, “I cannot think of more effective and passionate change agent to press for a new education vision, one in which students, rather than adults and bureaucracies, become the priority in our nation’s classrooms.”