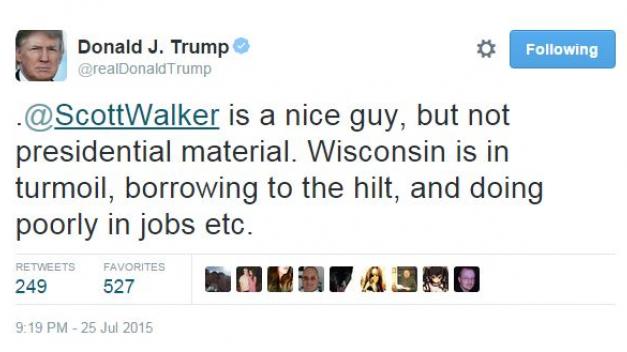 A week of controversy and attacks on other Republican candidates continued for Donald Trump Saturday. The Presidential candidate took to Twitter to criticize Wisconsin Governor Scott Walker.

In a tweet just after nine Saturday evening, Trump wrote, \".@ScottWalker is a nice guy, but not presidential material. Wisconsin is in turmoil, borrowing to the hilt, and doing poorly in jobs etc.\"

Trump also retweeted several tweets from others criticizing Walker and the decisions he's made in Wisconsin. That included a Tweet from a user who goes by \"Moderate Mic\", which criticized Walker's decision to deny a casino in Kenosha. That tweet said, \"Ask @ScottWalker why he left 1,000+ WI jobs on the table due to a political deal with the @paysbig Potawatomi\"

Earlier Saturday, Trump attacked Walker during a campaign speech according to a report from Bloomberg News.

A Monmouth University poll released at the beginning of the week showed Walker as the frontrunner among Republicans in Iowa. The poll showed Walker with a nine-point lead over Trump.

So far, Walker has not responded to Trump through Twitter or official campaign statement.