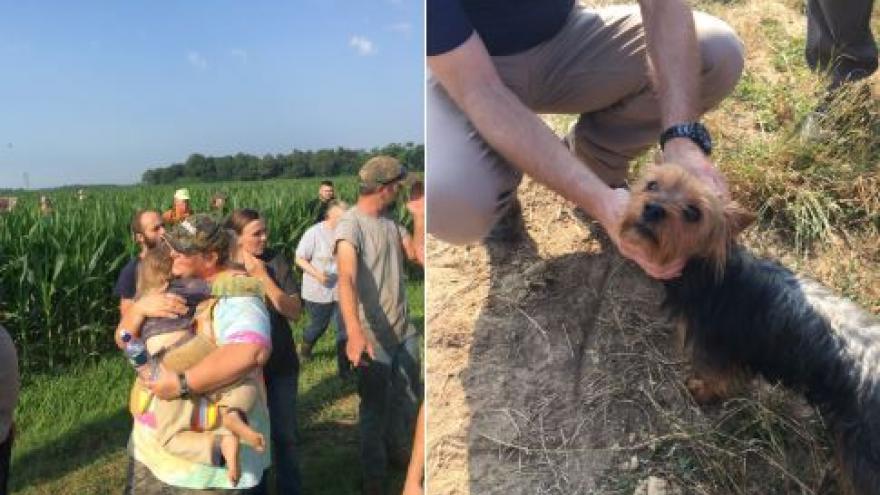 QULIN, Mo. (CBS NEWS/KFVS) -- Remy Elliott, 3, disappeared on Thursday near her home in Qulin, Missouri, KFVS reports. Police officers and volunteers searched the cornfield near the girl's home for nearly 12 hours and when they finally found her on Friday morning, they found her Yorkshire terrier, Fat Heath, waiting by her side.

Timber Merritt, Remy's mom, said losing her daughter was stressful. "I looked for her by myself thinking maybe she was just in the woods or somewhere where I just couldn't see her," Merritt told KFVS. "And I was calling for her and calling for her, and when she wasn't calling back I realized, 'I don't think I'm going to find her on my own.'"

Merritt knew she needed help searching in the huge cornfield, so she called friends, family and law enforcement. The search party grew to about 100 people, Merritt said. Two helicopters also joined the search.

John Copp was one of the first people to start helping Thursday night. He said "it was stressful and emotional," looking for the lost 3-year-old. "We were all just walking back and forth from one end to the other just yelling her name. All the flashlights started dying and the sheriff's office decided to call if for the night," the family friend said.

The search party continued to look and more people joined around 6 a.m. on Friday.

Makayla Hardcastle was with the group searching in the cornfields. "The corn feels like razor blades cutting you, especially for a child. And you don't hear well in the corn either, so when somebody is yelling your name you can hear them but you don't know where it is coming from," she said.

Merritt's brother, Quinlin, drove from western Kentucky to help in the search. He was the one who eventually found Remy. But the toddler wasn't alone -- her dog was with her when they were spotted in the field about half a mile away from the house.

"They said that she was asleep when he picked her up," Merritt said. "She was definitely exhausted, hot, really sweaty and it took a while to drink anything."

This is what #Community looks like. Law enforcement, 1st Responders and community volunteers coming together to find a missing child. Her dog stayed by her side all night. #StrongerTogether pic.twitter.com/aIDMtG6JTW

Because her faithful, tiny dog was there, Remy wasn't terrified to be alone in the wilderness overnight. "She said she wasn't scared because Fat Heath was there. If he wasn't I think she would've been terrified," Merritt said.

Remy is back to her normal self after visiting Black River Medical Center in Poplar Bluff. She is suffering from mosquito bites, but has itch cream to treat them. Her trusty pup Fat Heath made sure the scary night wasn't worse.