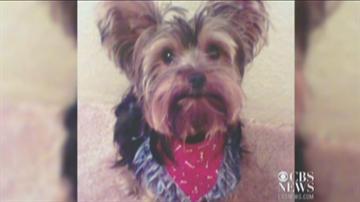 INDIANAPOLIS -- A Yorkshire Terrier named Bailey who disappeared from his Texas home six years ago was found this week in Indianapolis, and efforts are underway to unite him with his long-lost family, CBS Indianapolis affiliate WISH-TV reports.

Bailey was so much a part of Jaramillo's life he was the ring bearer at her wedding, but Bailey disappeared six years ago.

\"It was actually shortly after Christmas,\" she said. \"And I noticed my dog was nowhere to be seen, and I asked my husband, 'Where's Bailey?'\"

Grisel said Bailey, who was 4 years old at the time, apparently snuck out the front door. A jogger in the neighborhood said he saw somebody pick up Bailey.

\"And I said, 'Can you please take me to the location?' Maybe, you know, they're still in the area,\" she said. \"And he took me right to my front lawn. Somebody had stopped the car and picked up my dog.\"

The search was on. For six years, Jaramillo said, she held out hope Bailey would be found. On Tuesday, she was sitting in class at nursing school when she received a call from an Indianapolis area code.

Thinking it was a telemarketer, she didn't answer. But Bailey had been microchipped, and Jaramillo's dad was listed as a contact. He got the first word and called her.

Bailey had been found by a woman in Indianapolis and taken to a pet hospital.

\"He was, according to the source, he was full of fleas,\" Jaramillo said. \"They had to give him a flea bath. And he had a bad mouth infection, so luckily, he's in good hands now, and they're taking good care.\"

Now, Jaramillo is, with the help of a crowd-funding site, raising the funds to get to Indy and bring Bailey back home.

\"I mean, it's just amazing,\" she said. \"It really is. Nobody plans on something like this, right? I mean, six years later. That's pretty amazing. I'm so excited to see him.\"

The mystery of where Bailey has been, how he ended up in Indy and who took him is not yet solved. Jaramillo said that when Bailey gets back home the family is going to have a huge animal party, including a doggy cake. They have another dog they're sheltering, a Yorkie, and a cat. She hopes all of that will happen as early as next week.