Dog hitches a ride to hospital with his human 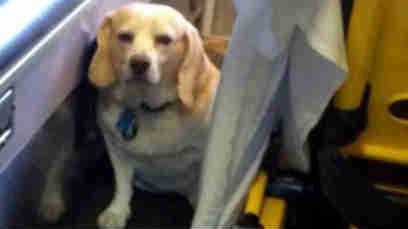 Buddy the dog went for quite the ride recently after his owner wasn't feeling well.

The Standard Times reported that the 35-pound Beagle mix stowed away on an ambulance in San Angelo, Texas, after rancher JR Nicholson complained of feeling dizzy and asked his ranch hand to be transported to the hospital.

Buddy reportedly hopped on the side of the ambulance and rode for about 20 miles before another driver flagged the ambulance crew down.

\"We didn't have anything else to do but to load the dog up and put him in the ambulance and take him to the ER with us,\" emergency medical technician Tanner Brown told the publication.

The story of the dog's devotion went viral along with a picture of a seemingly unrepentant Buddy riding inside the ambulance.

Nicholson, 85, said he adopted Buddy from a shelter four months ago and was \"impressed\" by his pooch's determination to stay by his side.

\"He didn't have to go to the hospital with me, but he did,\" Nicholson said.