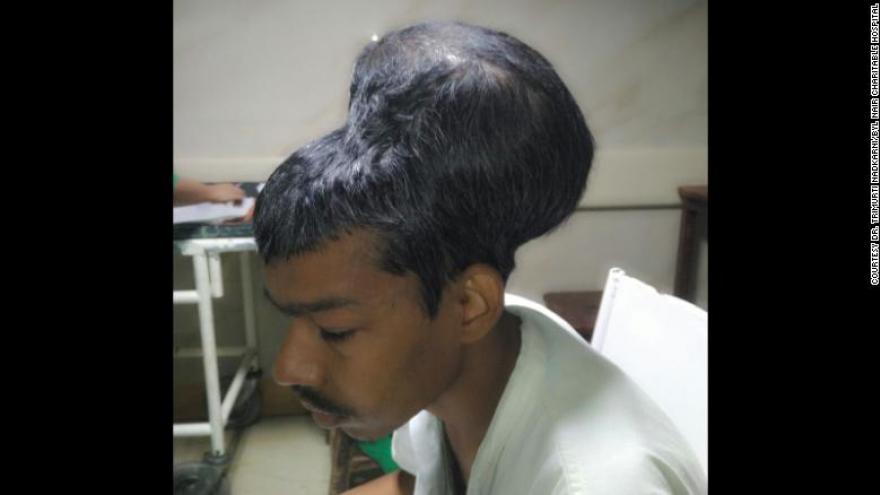 Dr. Trimurti Nadkarni, the surgeon who conducted the operation at BYL Nair Charitable Hospital, described the tumor as the "largest in the world" based on comparative studies conducted by his team. CNN has not been able to independently verify those claims.

He added that the surgery, which took place on February 14, was life-threatening and tricky as the tumor was embedded inside the brain.

The team waited until the man was stable after surgery before making the news public.

Santlal Pal, a 31-year old cloth vendor from a village in the northern Indian state of Uttar Pradesh, traveled to the hospital in Mumbai to seek treatment earlier this month.policy.

Over the last six months, what had initially been a swelling, quickly morphed into a mass that was almost as big as his head, measuring 30 by 20 by 25 centimeters cubed, according to Nadkami.

The tumor's growth had breached the man's skull and was growing under the man's scalp, said Nadkarni, also professor and head of neurosurgery at the hospital.

"The basic size of the tumor was daunting," said Nadkarni. "It was compressing the brain."

Pressure built up within Pal's brain and affected his optic nerve, leading him to lose his vision.

Indian patients living in rural areas often have to travel hundreds of kilometers to access comprehensive healthcare, or even to see a licensed doctor.

Many go to seek treatment at government hospitals, which offer free high-quality treatment, but are often understaffed and overburdened.

It is not yet known if the tumor was benign or cancerous, said Nadkami, but Pal is not presenting any cancer symptoms currently.

He is now in recovery at the hospital and is walking around and has a 50 percent chance that he will regain his vision, Nadkarni said.

"There was no other answer, when you know the tumor has to come out, you have to do it," he said.